PLAYING IS NOT A LAUGHING MATTER!

When cats are still kittens, playing is an important part of their development and growth, and ambushes, races and disasters of all types can occur all day long. What we have to do is let them burn off the energy, to sate them. Still, as time passes and kitty becomes cat, although he’ll be quieter, he will still need to play, to exercise and entertain himself, especially if he is an indoor cat. Playing with your cat is a great way to build the relationship and reinforce the trust that binds you. And we, as loving owners, have the duty – and the honour – of entertaining him. So… what do we do?

We can play prey! Or better, prey and predator! Depending on the cat! Cats are avid predators, as the little trophy we now and again find on the doormat proves! Playing means simulating the hunt and, to stimulate this instinct, we need to reawaken the hunter in our cat. The cat is, of course, the boss in this game. If his instinct for hunting has sunk deep into hidden compartments of his soul, you can run on all fours all over the house trailing strings and paper birds, but the boss won’t even look up. But if he decides to get in the game, then it’s a whole different story. The role we then get to play is that of stimulating the cat’s acute senses and enticing him to the chase by imitating that which might resemble free roaming prey. This means quick movements, prey-like noises (but never too loud, he has sensitive hearing and it would be more of a bother than a delight) and moving away from him – that said, obviously prey wouldn’t head straight to the mouth of the predator, now would it! – to spark the interest of your mini-predator.

What is the perfect game for your cat? There is no one perfect game or toy. Each one has its preferences, which may change with time. The same toy that drove him to delirium a few minutes ago may leave him entirely nonplussed right afterwards, and then be the favourite again when another game has failed to keep his attention. Let’s look at what stimulates cats naturally, their natural prey: flying insects, bugs, lizards, mice and the like. Toys that make something of a shushing noise attract their attention. Small feathered objects sent flying through the air in front of them are perfect stimulators of their predatory instinct as the sound reminds them of the flapping of bird or grasshopper wings. Fishing rod type toys –the rod with a string and something hanging off it – drive them nuts, they can happily chase it all over the house, hunting it down as though it were an invading rodent. There’s a vast selection of objects to hang from the end of that string, from fur covered shapes to cute little animals in natural fibres, cloth ones, and so forth. A similar effect can be elicited with just a string with something hanging on it, simply drag it around back and forth over the floor and the carpet, like a mouse on the run.

It’s important to note that, contrary to what you might believe, the shape of the toy is not fundamental to its effect on the cat. Not having any of the characteristics of a living creature – odour, heartbeat, hormones and the like – a fake mouse is just the same to them as a little ball or any other small item. The determining factor in what we chose for him to play with is our own taste, but we have to take other things into consideration for the cat itself: the material it’s made of, the noise it makes, how well it rolls and can be bitten into when captured. All factors that will enhance the attractiveness of the toy in the cat’s eyes. Not only, but the more the prey manages to escape his claws, the more the cat will be enticed to chase it. This is why anything that rolls, any little ball or round object that can be chased, is perfect for him to play with. And the selection of this sort of item is also vast, with plenty of different shapes and materials to choose from. 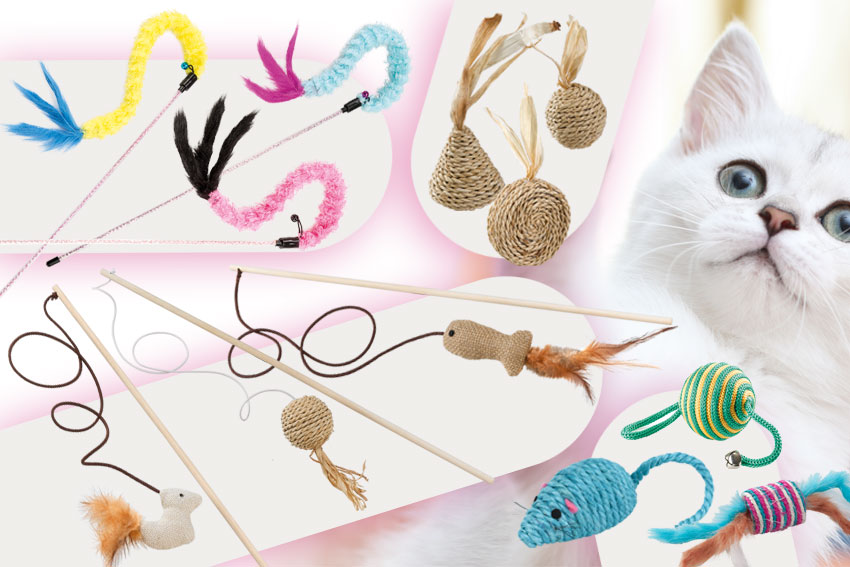 Do, however, keep in mind that cats don’t always like to play the same game or with the same toy, just like toddlers. If he seems lacking in enthusiasm or somewhat lazy and won’t get up even if you drag him, don’t despair, he hasn’t suddenly become old and boring – he probably needs something new to grab his attention… and you get to figure out what that will be!