The Pomeranian Fox is a dog breed born from a cross between the Spitz and the Italian Fox. At first glance it may seem like a soft plush, but all that fur hides a curious puppy full of energy, like Minu, Lisa’s Pomeranian puppy.

Graceful and furry, the Pomeranian, or dwarf German Spitz, is a dog breed with royal origins, suitable for apartment life, intelligent and predisposed to training. Not everyone knows, however, that under its tender appearance is hidden the spirit of a guard dog and a bursting energy. 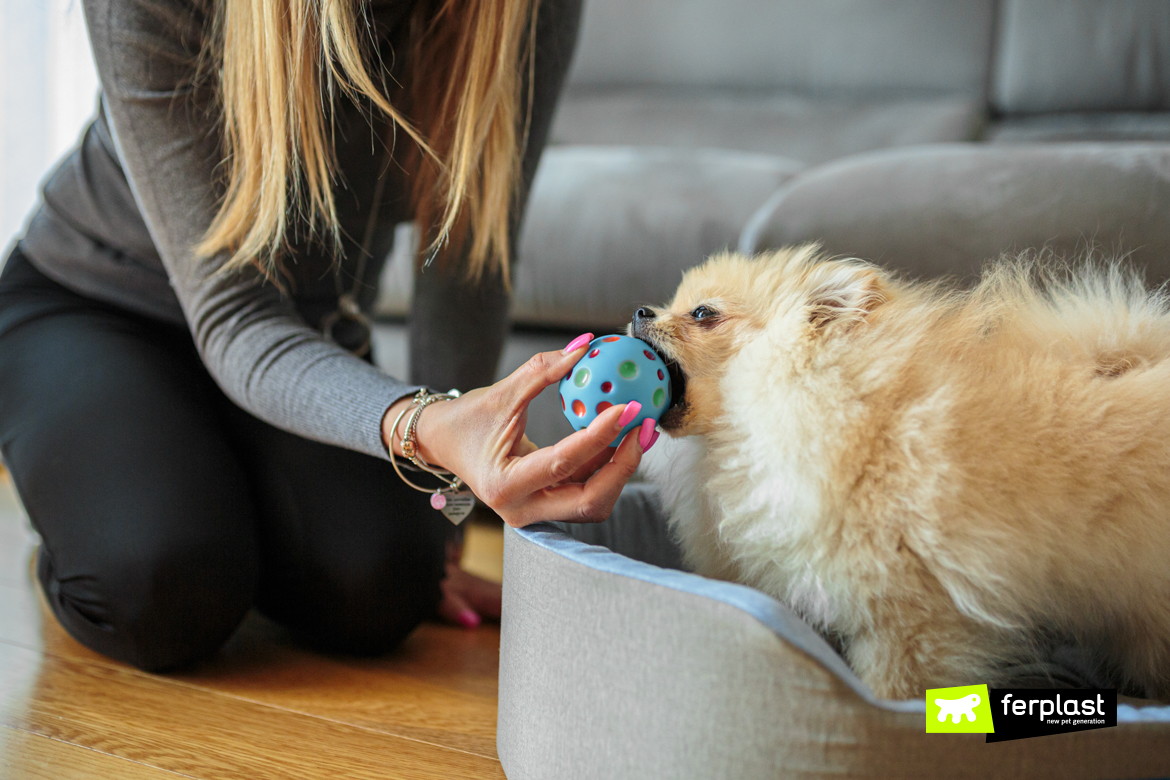 Origins of the Pomeranian Fox

The Pomeranian counts among his prehistoric ancestors the so-called “peat dog”, guardian of the flocks and watchdog. Pomeranian owes their name to the region of Pomerania, between Germany and Poland. In the nineteenth century, they became the star of the aristocratic salons, so much to capture the attention of Queen Victoria. Thanks to the interest shown towards the breed, the queen contributed to refine and breed it, by mating a specimen of German Spitz with the Italian Volpino, smaller in size. Only in 1988 the Pomeranian Spitz is recognized as a national German breed, despite England has long claimed its paternity.

Physical characteristics of the Pomeranian Fox

The Pomeranian Fox looks like a wad of fur of uniform color. His coat is thick and long, soft and shiny. The fur is particularly thick on the neck, where it forms a sort of collar or crown, while the tail, of medium length, is twisted backwards and is also covered by a thick plume. Pomeranian have pointed and erect ears, which resemble, precisely, those of a fox. They are very small in size, and males are generally smaller than females. The height ranges from 18 to 25 centimeters and the weight does not exceed 5 kg. 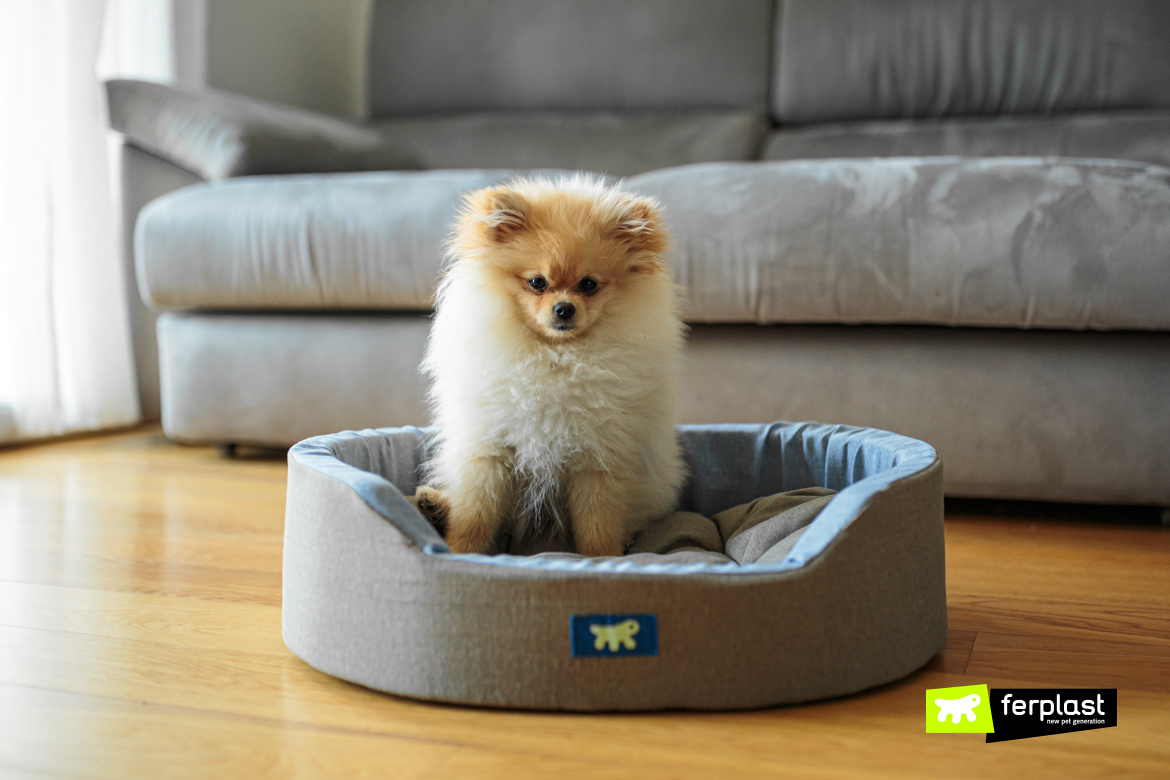 The Pomeranian Fox is by no means a “purse dog”. The intelligent and lively eyes of Minu, Lisa’s Pomeranian Fox puppy, already tell us a lot about the personality of this breed. In spite of their small size, German Spitz have a physiological need to move around and explore new spaces to satisfy their innate curiosity. They need constant positive stimuli, so it’s important to take them outside and let them try new activities. Lisa and Minu, before leaving for their walk, wear Agila Fantasy, the comfortable and fashionable harness, perfect for a breed historically accustomed to glamorous environments. For walking, on the other hand, the retractable Flippy One Cord Mini leash allows the puppy to move freely and Lisa always has full control. 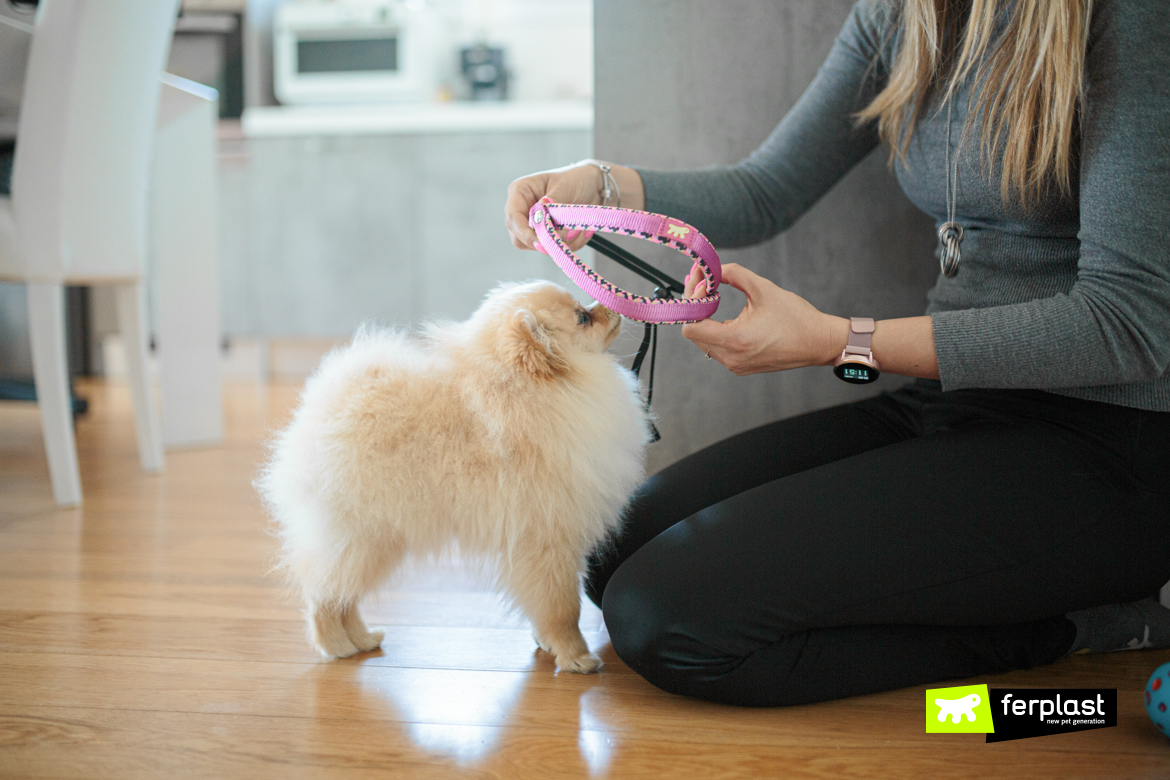 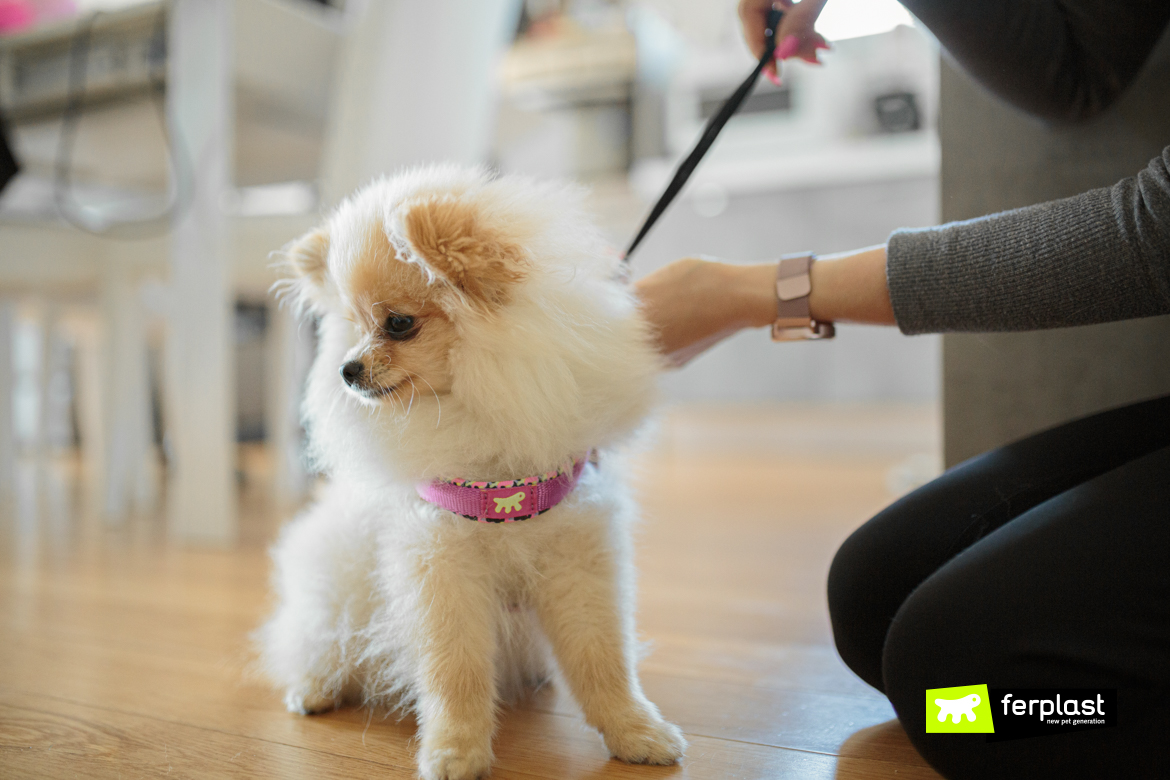 But once outdoors, Minu can’t wait to play with Ferplast’s toys. Her favourite is the Puller, in mini size, which allows her to run and have fun with her Lisa. 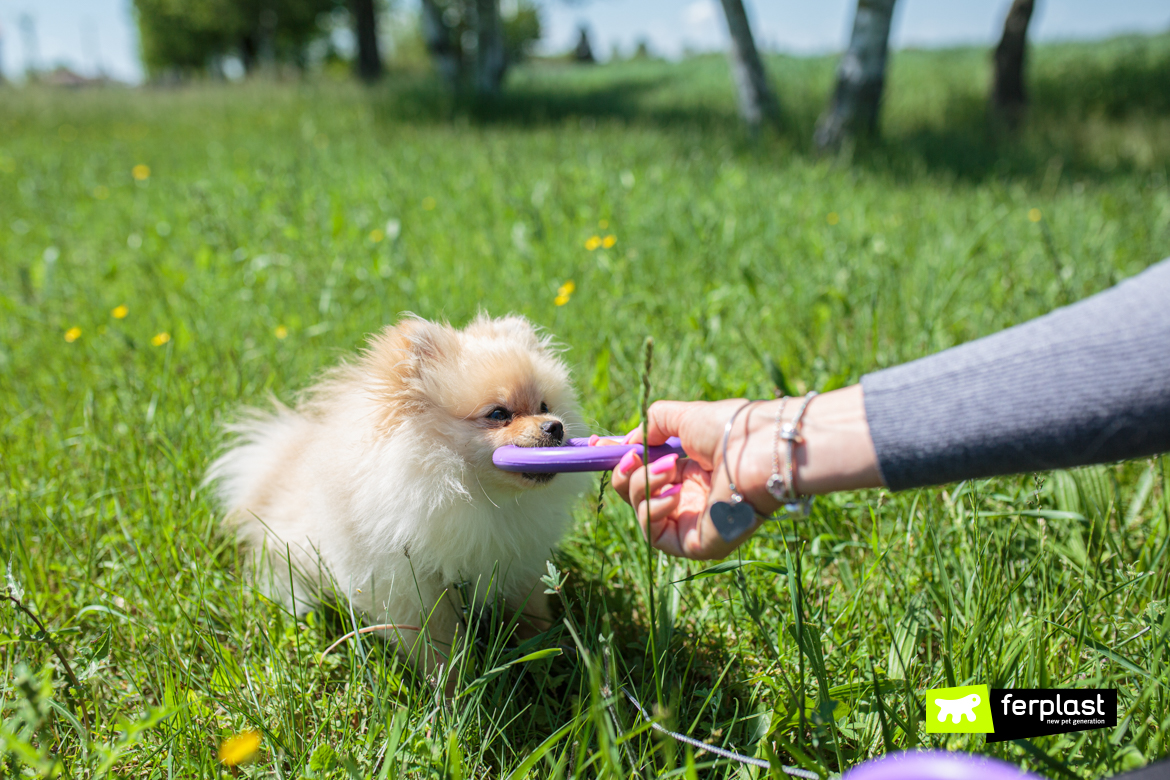 The Pomeranian Fox is a particularly intelligent breed, which tends to become deeply attached to his owner, almost possessive, and for this reason they are good for training. They are sweet and meek and shows a willingness to please their master. They don’t like being alone and they suffer from it.
The Pomeranian Fox is protective and territorial, especially towards his human of reference. Often, in fact, they are not considered a family dog, because they could compete with the children of the house for the affection of mom and dad.

Care and maintenance of the Pomeranian Shepherd Dog

But how to keep all that fur smooth and shiny? The answer is to have a kit of brushes each with a particular function. First of all, it is recommended to brush the Pomeranian’s coat daily (at least for the first eight months of life) to remove dead hair and dirt. Since his coat is composed of both hair and undercoat, it is recommended to use specific brushes for both. GRO 5942, for example, is a cording brush for undercoat care, suitable for medium and long haired dogs, like our puppy. With its stainless steel folded threads, it acts deeply without irritating the skin. A comb is available to remove dead hair from the brush.

For parasite removal, it is essential to use a comb such as the GRO 5838, which has a row of dense, chrome-plated metal teeth with a rounded tip. Finally, to untangle knots and make the hair smooth and shiny, the GRO 5929 is equipped with strong plastic teeth with a rounded tip, which also provide a pleasant massaging action. Brushes are invaluable tools for keeping Minu’s coat beautiful and healthy. 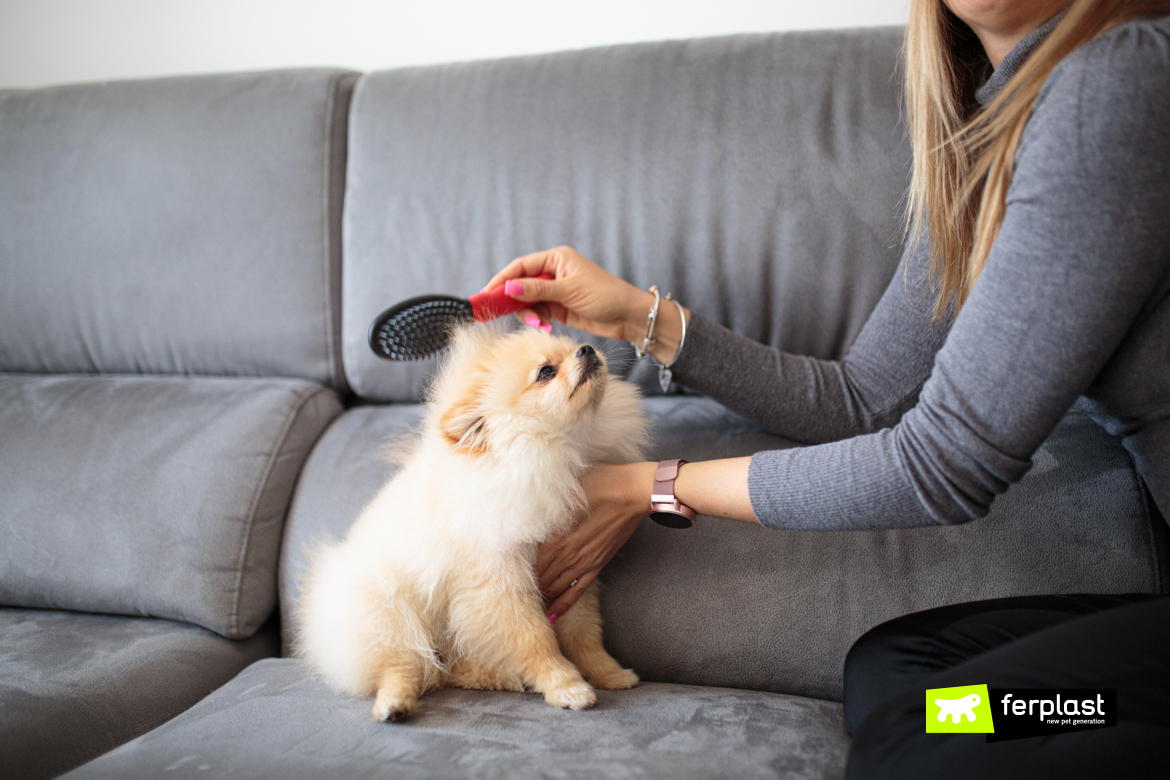 The fact that he is an indoor dog makes him more prone to obesity. For this reason, in addition to exercise, it is important to keep him in a balanced diet. Since he is a small dog, rations must also be controlled. An adult Pomeranian Fox takes in about 300-400 calories a day, although the requirements depend on the dog’s metabolism and activities. To satisfy Minu’s hunger, Lisa fills Mira bowls with water and kibble twice a day. These bowls are very practical and hygienic, as they are made of painted metal and have a non-slip rim. 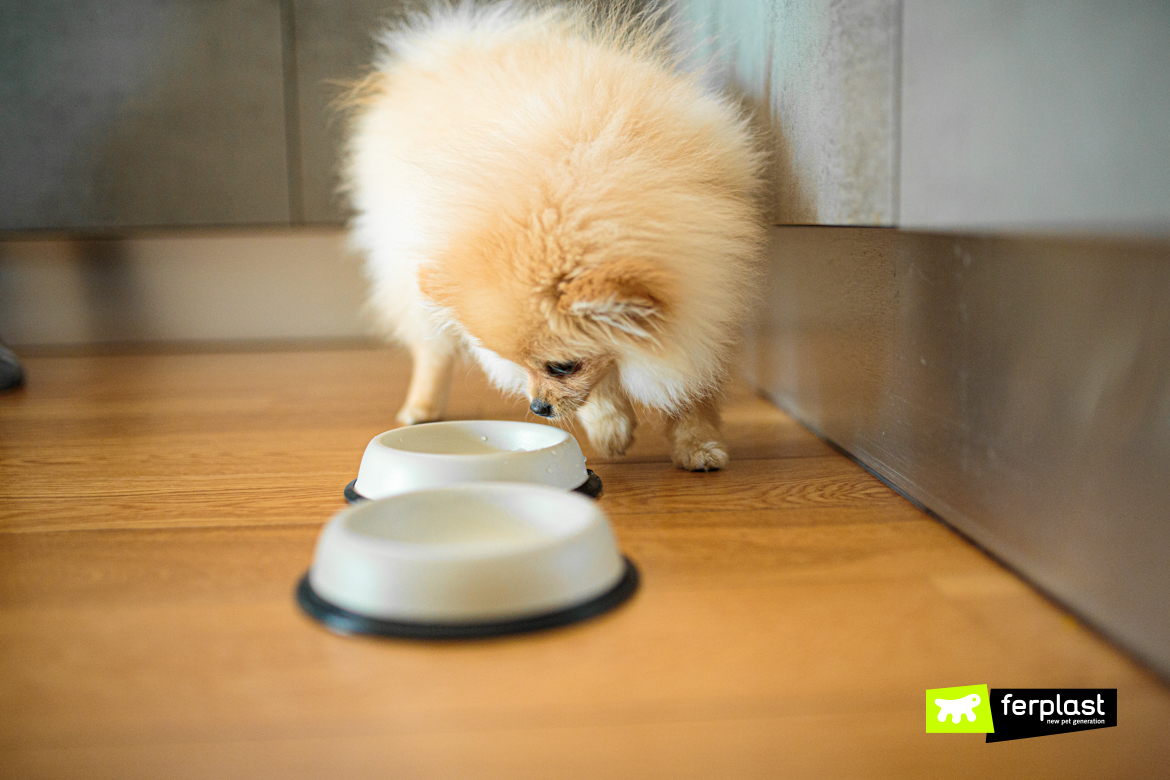 Taking care of a Pomeranian Fox requires little but constant attention. The relationship that is established between a Pomeranian puppy and his owner is unique and special, just like the one between Minu and Lisa. Her intelligence, her vitality and her sweet appearance immediately arouse sympathy and make these dogs a perfect companion.