LAZY CAT: 3 EXERCISES AND GAMES TO DO AT HOME

Cats are usually very active animals, but when they live with humans, they tend to get a little lazy and risk to lose their natural hunting instinct. We suggest three funny exercises and games that you can do at home to keep your lazy cat’s spirit alive!

It’s a good idea to get your lazy cat to play by encouraging him to do some small physical exercises. The secret of preventing your cat from becoming lazy is to reproduce wildlife situations as much as possible such as climbing trees, catching prey and running away from predators.

Here are the best games to awaken his instincts!

Encourage a lazy cat to move with food

The first step for getting a lazy cat off the sofa is to tempt him with kibble and delicious snacks. Always leave the bowl empty, so that every time he gets hungry, he will have to move around and look for food. When you see your cat wandering around the rooms, eager to eat, fill his bowl, but don’t put it down straight away, let him chase you around the house. Without even realizing it, the cat will have had a good walk. 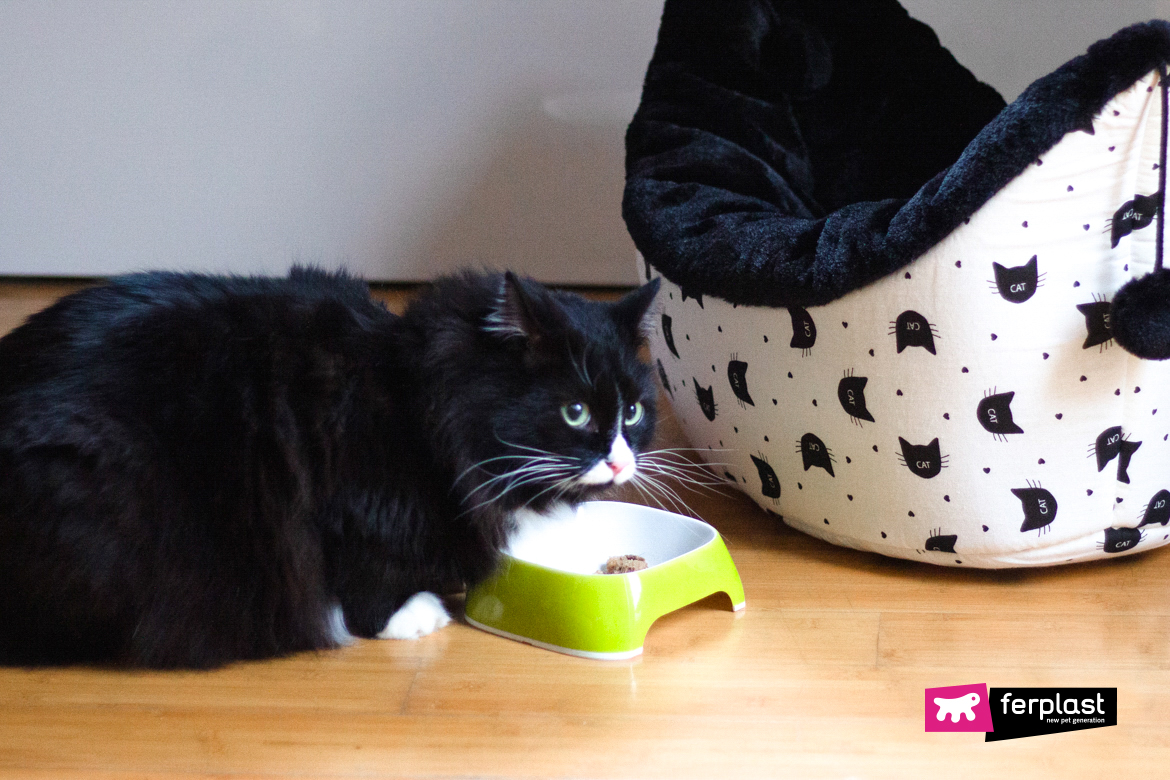 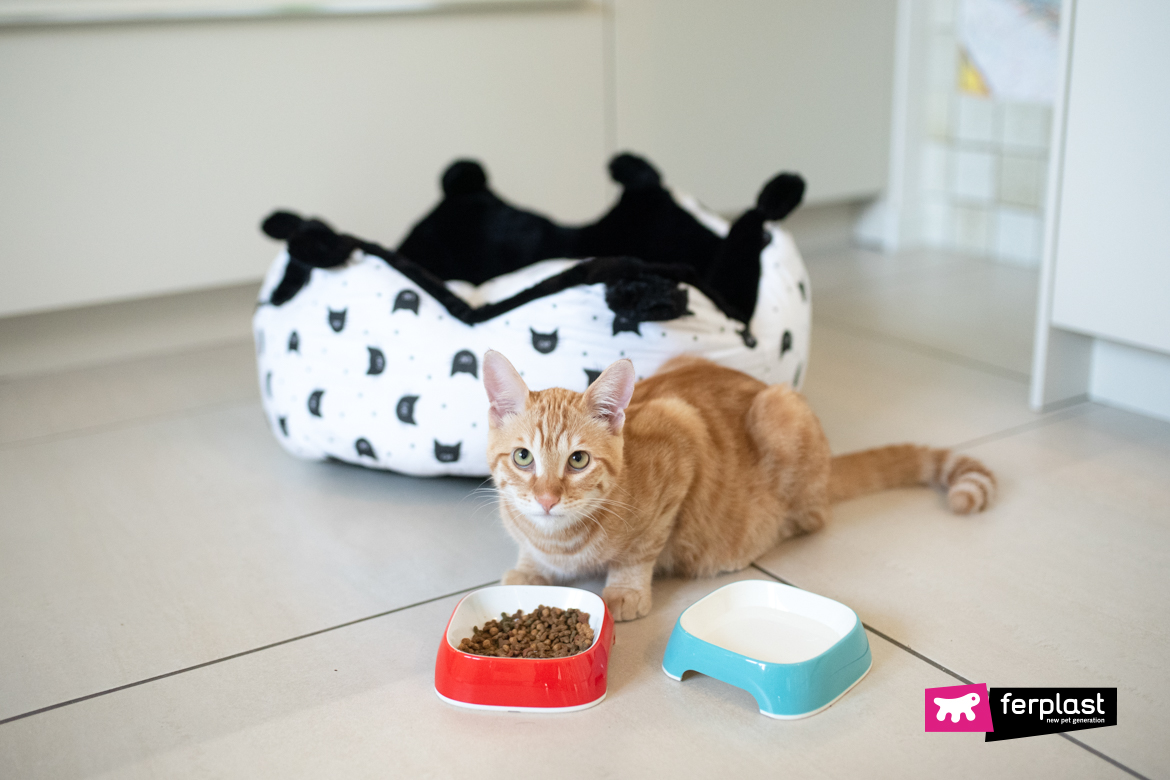 As a feline, your cat loves to jump on raised floors and observe the house from above. Install cat circuits in at least a room of the house so that your cat can find an alternative to his usual walks.

For example, choose a scratching posts like Ferplast’s Blanco model.

Blanco has a vertical tower structure, with two holes in the front part, that are designed to allow the animal to enter easily and to practice jumping. At the top, the unit features a comfortable platform, ideal for stalking and allowing the cat to keep an eye on its surroundings. Thanks to the attached sisal ball, your pet will train to catch preys. The side wall, on the other hand, has a large surface covered in resistant sisal, allowing your cat to practice scratching.

With a single object, your cat can train all parts of his body! 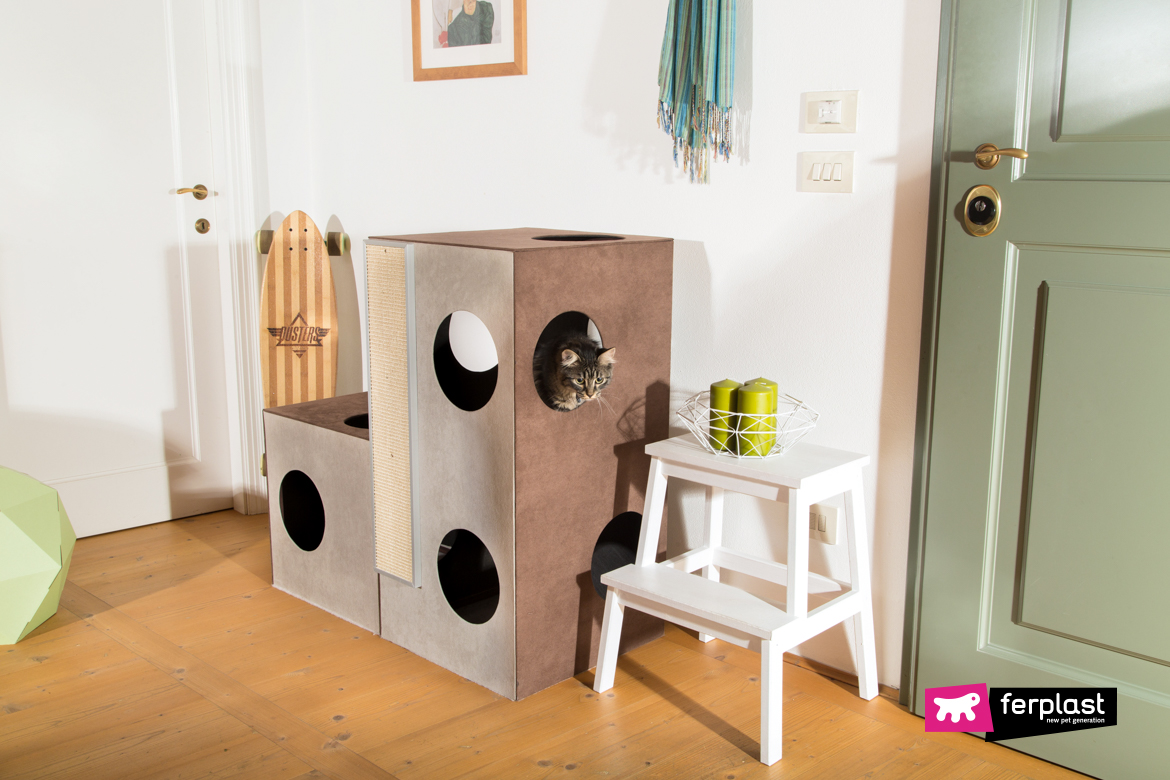 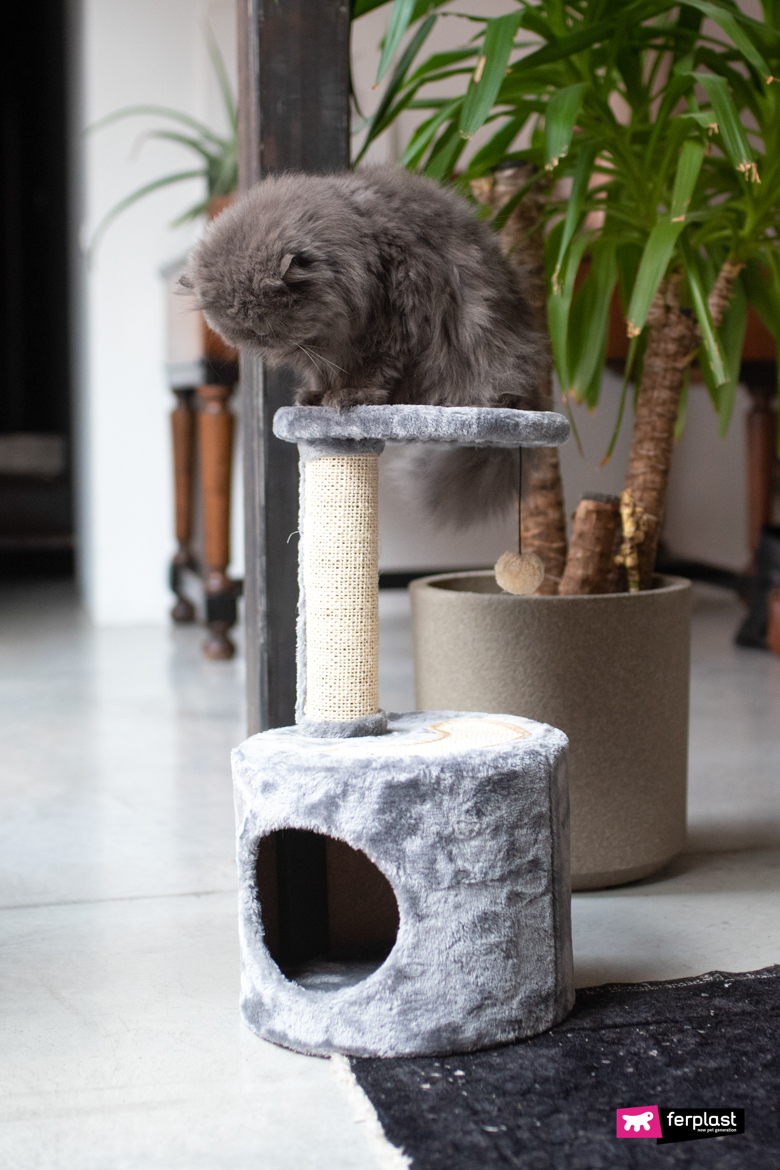 Stimulate your cat’s predatory instinct with circuits and balls

Playing is essential to get your cat moving. A lazy cat can be stimulated by his human parents, also when he is alone at home. What is important is to simulate an ambush.

In order to awake the cat’s playful instincts, he needs a prey. Classic toys such as sticks with feathers attached to the string and mice are a sure bet if you want to entertain a lazy cat. So are circuits such as Turbine and Vertigo by Ferplast with resounding and lightening balls that simulate fleeing prey.

Give your cat the satisfaction of catching up with his prey every now and then and keep his attention high by having not too long sessions, but frequent. 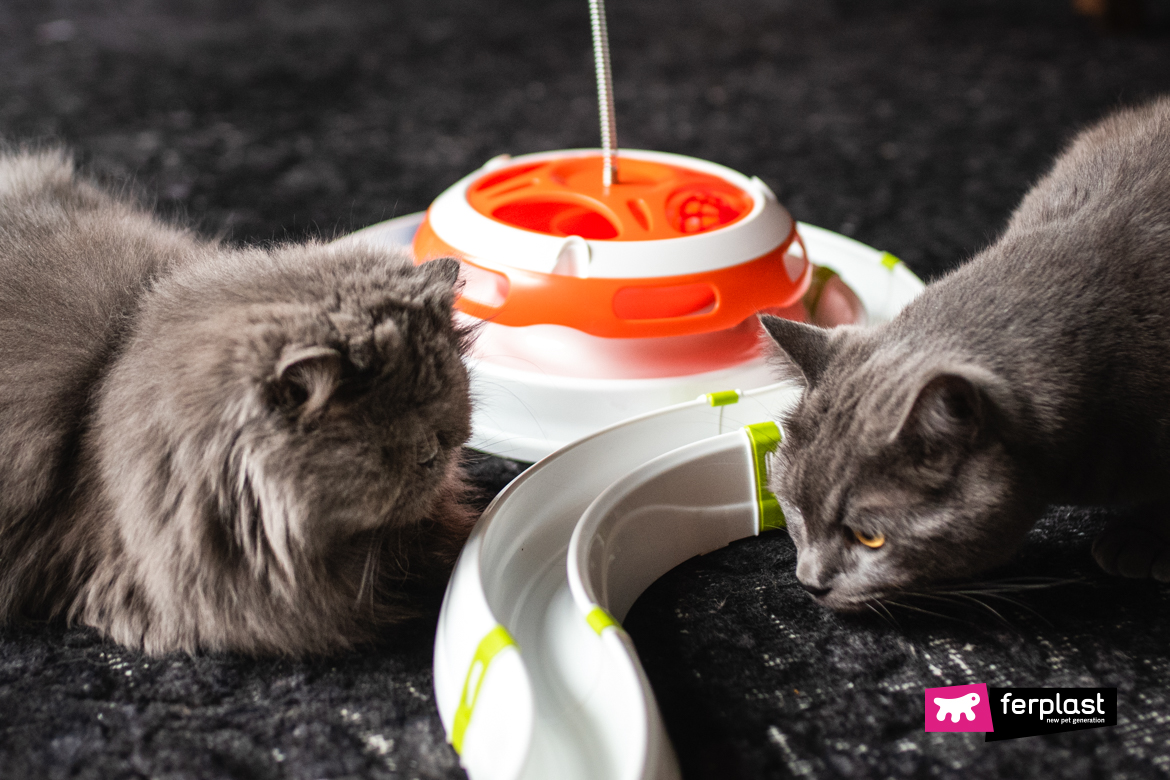 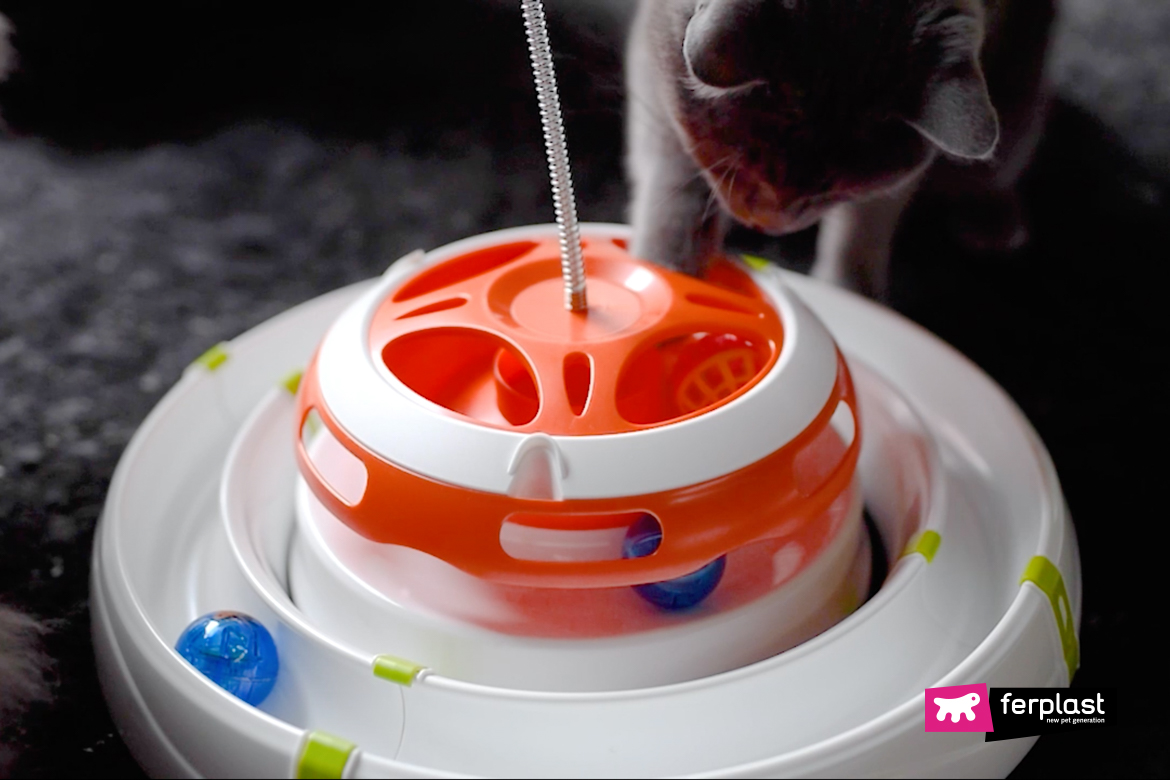 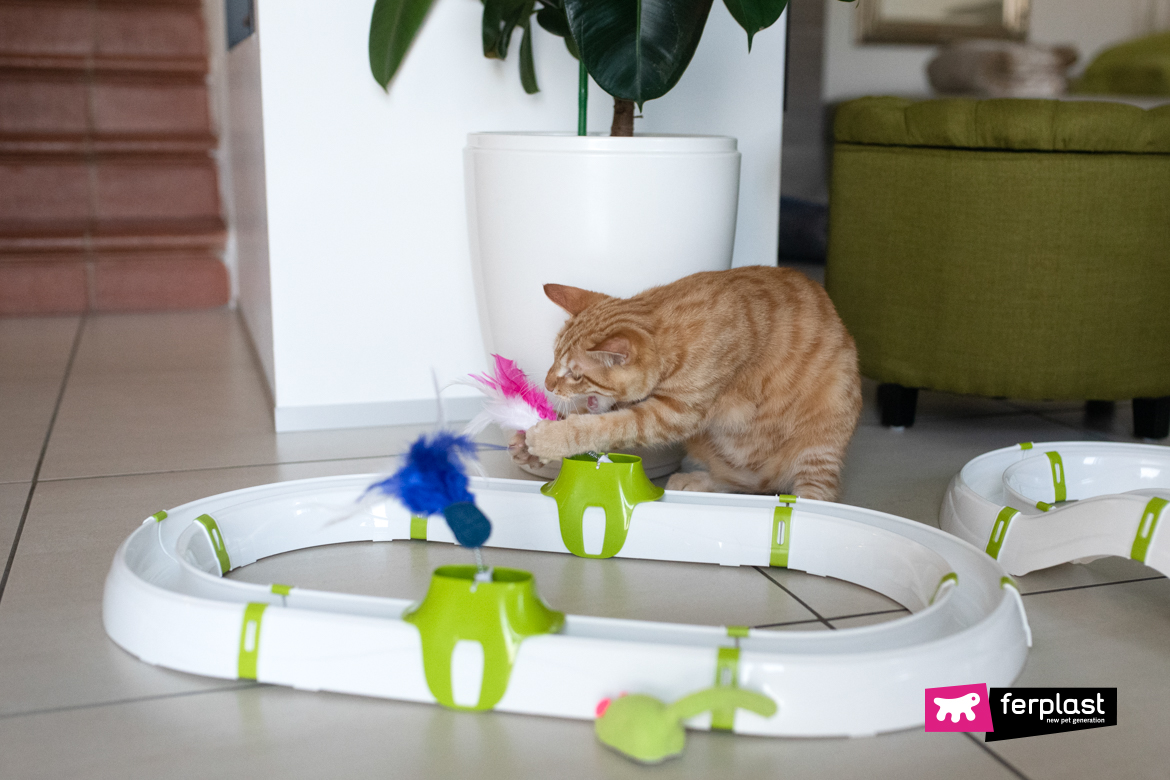 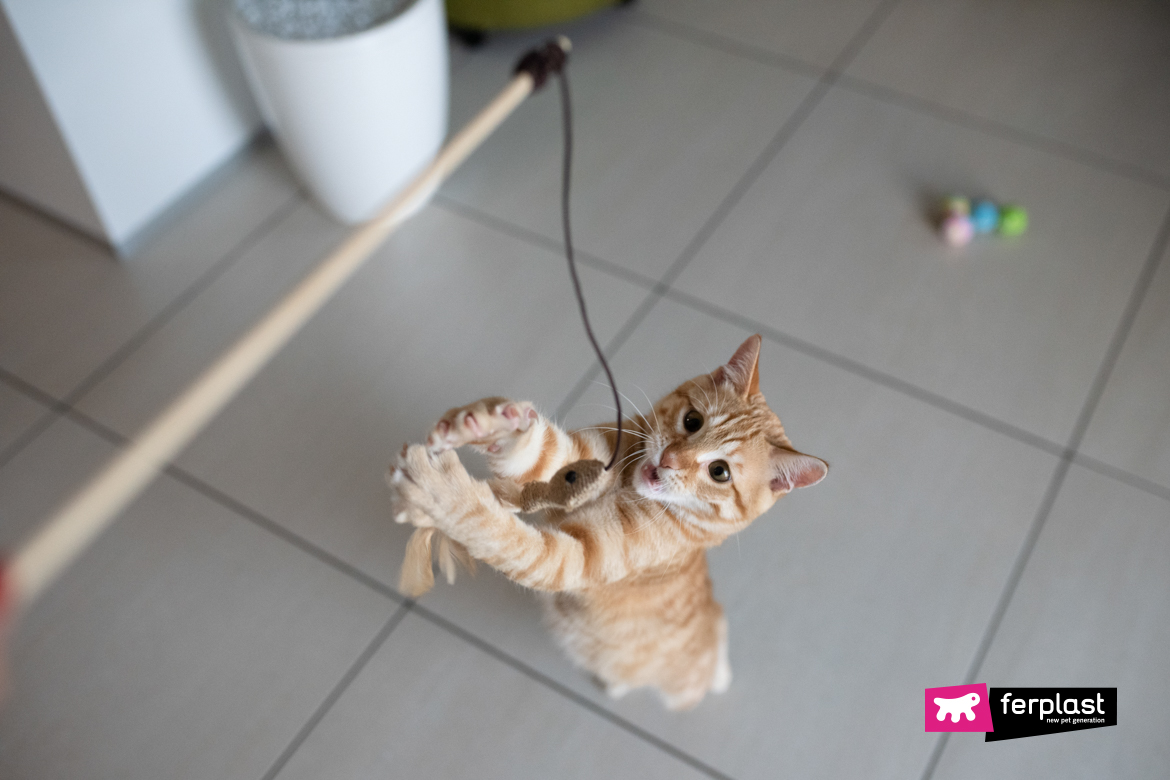 Laziness is an “ugly beast” that cats also have to overcome. Make sure you have a wide choice of diversions, as cats tend to get bored quickly so you will need to change the game often!