WHY DO CATS SCRATCH?

One feature common to all cats is that they scratch their claws, usually on the couch, on the furniture in the home or on the trees in the garden, almost always leaving deep and obvious markings (the cause of the greatest man-feline conflicts!). But have you ever wondered why they do this?

Claws are vitally important for a cat and are used for a variety of purposes, hence we should not be surprised if our kitten spends many hours taking care of them. It is, after all, part of her DNA to keep them in good shape!

How are their claws formed? Felines have retractable claws, which remain hidden when not in use. Their growth is constant and occurs in layers and, usually, those of the front paws are sharper and pointier than the rear ones since it is easier for a feline to take care of them.

But back to the question, why do cats scratch?

1) TO MAKE THEM STRONGER. As we said prior, our furry friend’s nails grow in layers and it is only by scratching objects that Kitty manages to remove the superficial and old layers of the claws, thus allowing the development of new ones. Scratching also has the purpose of filing the claws to be pointed and rendering them sharper.

2) TO MARK THEIR TERRITORY. When the cat scratches, it stimulates the scent glands in the pads beneath the paws, which give off a distinctive scent. As such, leaving scratches around delineates a feline’s territory and helps the cat feel safe and comfortable, thus demonstrating her supremacy over other animals. 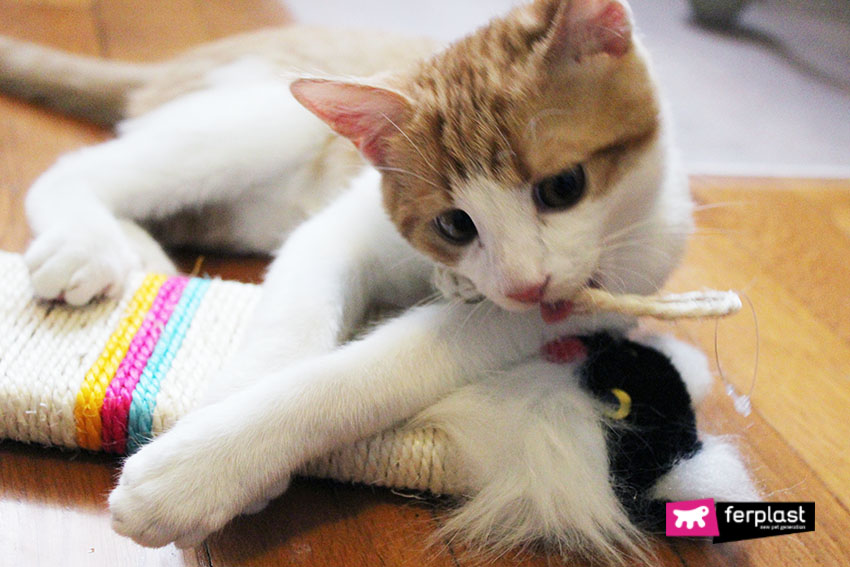 3) TO PREY UPON, DEFEND THEMSELVES FROM AND CLING ONTO THINGS. Cats hunt, play and attack by particularly exploiting the front paws, as they also do when jumping from one branch to another like a monkey. Having nails that have been taken care of is crucial to being able to do all these things without difficulty.

4) TO RELAX. When a kitty scratches her paws, she usually also stretches her entire body, thus helping her to relieve stress and feel more relaxed and happy. 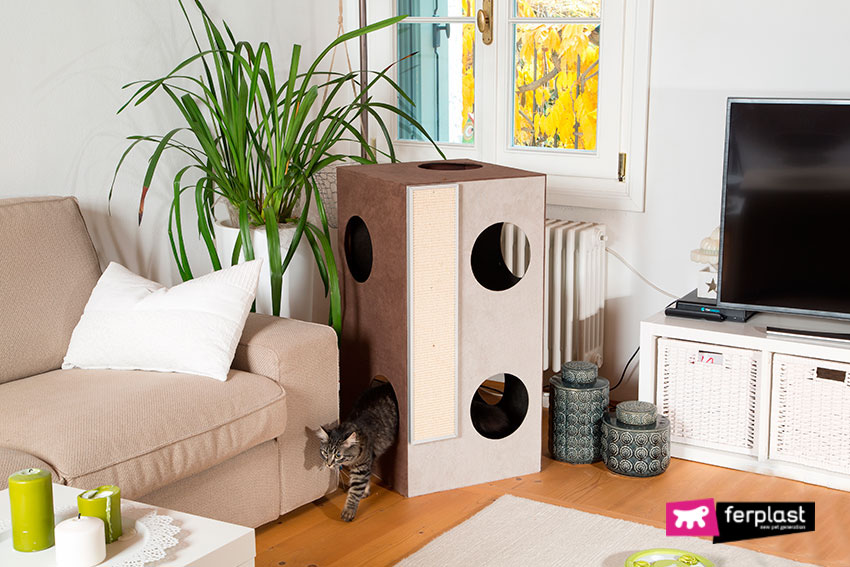 For all these reasons, if we have a puss in the house, we must give her a scratching post so that she can vent, whilst leaving the furniture unscathed! Ferplast has designed scratching posts in small, medium and large sizes.

If you want a practical scratching post that you can move about, perhaps even on the go, check out the flat-scratchers with comical animal heads atop, equipped with a sisal surface and a tie to hang up where needed, be it on the wall or attached to a radiator. A good medium-size scratching post is the Tripod. Made in solid wood, it comes with four scratch-resistant sisal surfaces and has the advantage of not being cumbersome, whilst being easy to handle and to move. Some scratching posts are also items of home décor, as is the Kubo 2, a wooden piece of furniture lined with soft material that also acts as a cat house. It has an entire panel in sisal that will allow the kitty to exercise and scratch her claws.

Now do you understand why it is very important to give your cat a nice scratching post on which she is free to scratch her claws?