Playing is a fundamental aspect in the life of all living beings. It is a moment of growth and socialisation and it stimulates creativity. Playing is extremely important for cats, both as kittens and as adults, but why is that? Let’s find out together!

The playing habits of kittens

Kittens start to play from their third week of life and, from that moment until the seventh week, it is normal to see them move, chase each other, ambush each other and paw at each other. Thus, their playing can take place in the company of their fellow kittens, but they sometimes even play on their own: from week seven to week ten, it is quite likely that you will surprise your cat playing with other objects, like balls, balls of wool, fake mice or anything she comes across…

According to many theories, playing (particularly with objects) is the behaviour that comes closest to hunting and therefore, by playing, they are training themselves for adult life. Not only that, but playing also promotes both physical (muscles, sight, hearing, touch) and psychological development of our furry friends, allowing them to gain control of their own bodies and the surrounding environment. 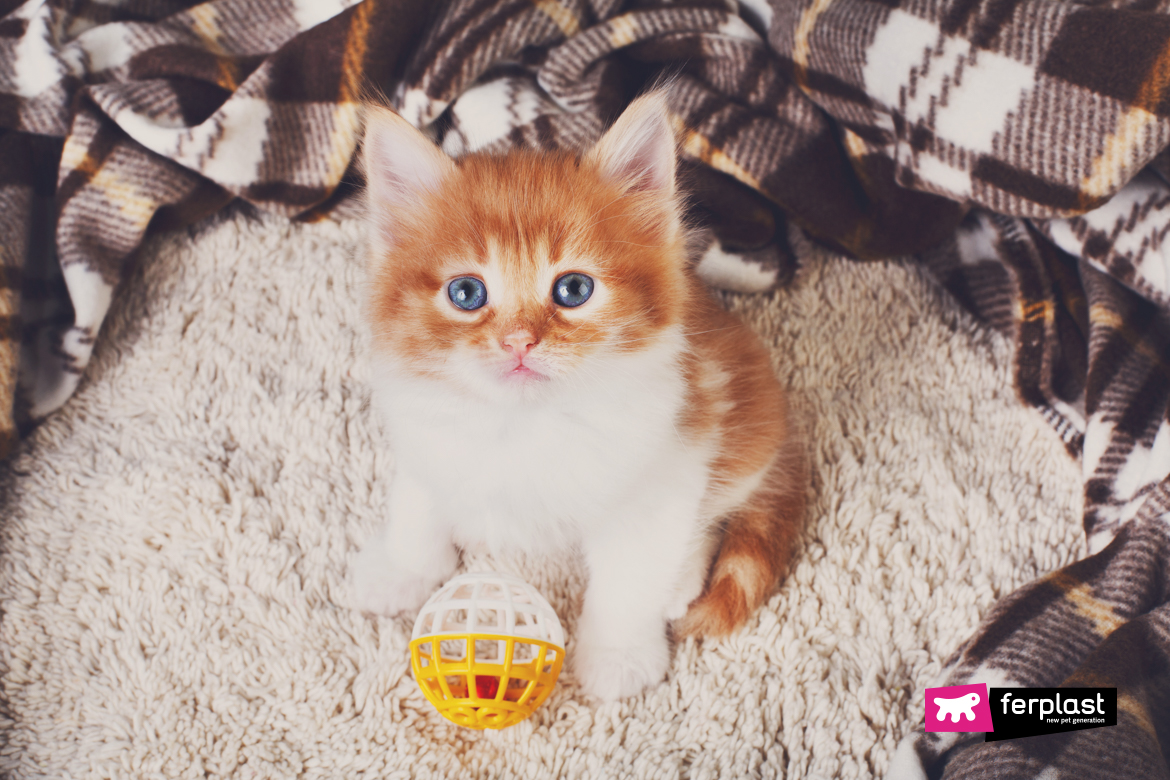 Yes, even adult cats play! They may be timider and more reluctant to let themselves go, but a cat that has reached adulthood still has a lot of fun chasing strings, pendants and fake animals, while their preference will be for hunting games, meaning those that end with them ambushing their prey and possibly with a little “biting” too! A feline of this age usually plays to vent an excess of energy and to satisfy the need for movement. 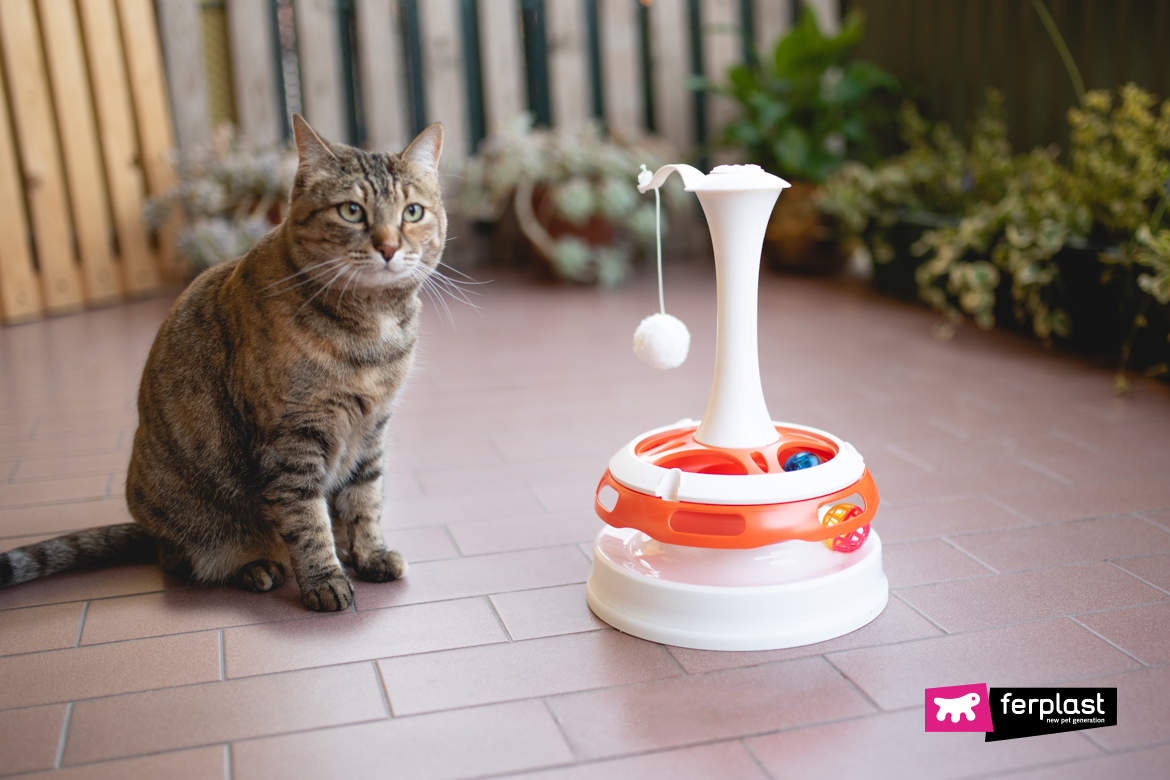 How to play with your cat

If your cat lives in an environment in which there are other animals, she will prefer to have fun in their company, but if she is the only pet living in your home, you will need to do everything you can to stimulate her.

Considering the fact that cats are attracted to objects that move and that make a sound, you can opt for sticks with bells inside them or others that produce particular sounds: a piece of wool sticking out of a door, a bouncing ball or a little bell are all you need to stimulate the predator instinct within them. Aim, chase and ambush! The hunt for flying prey is also much appreciated. 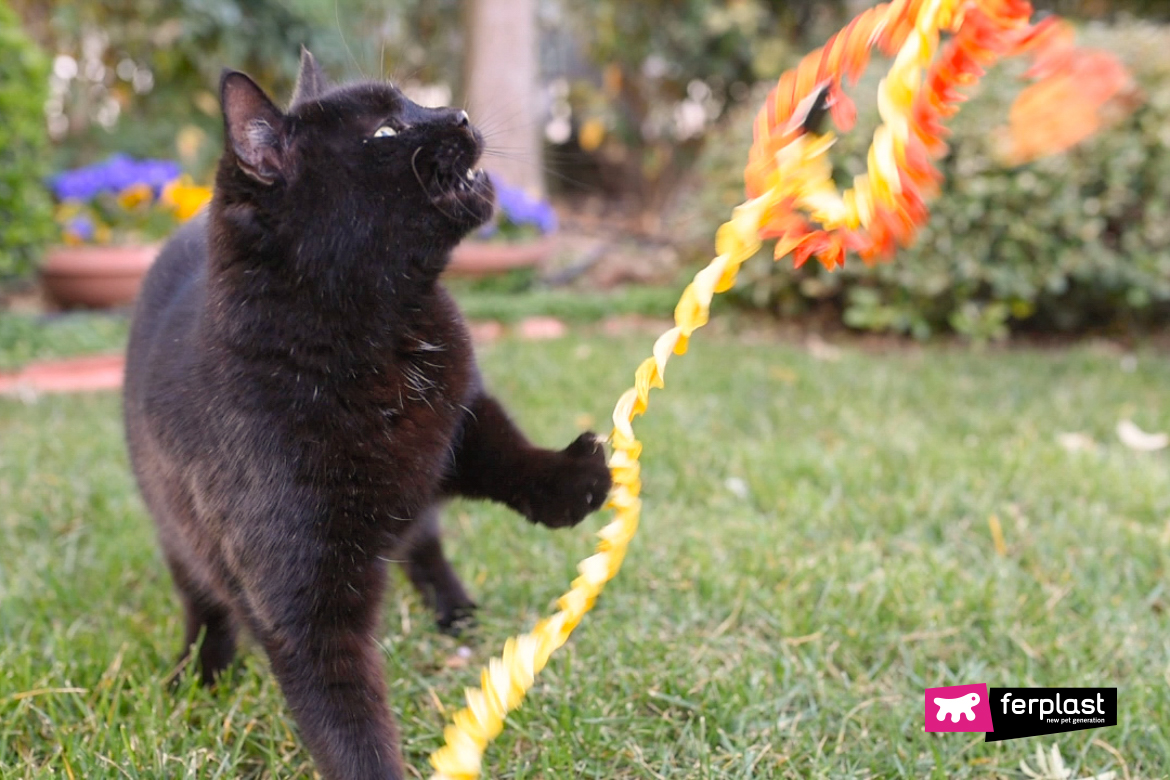 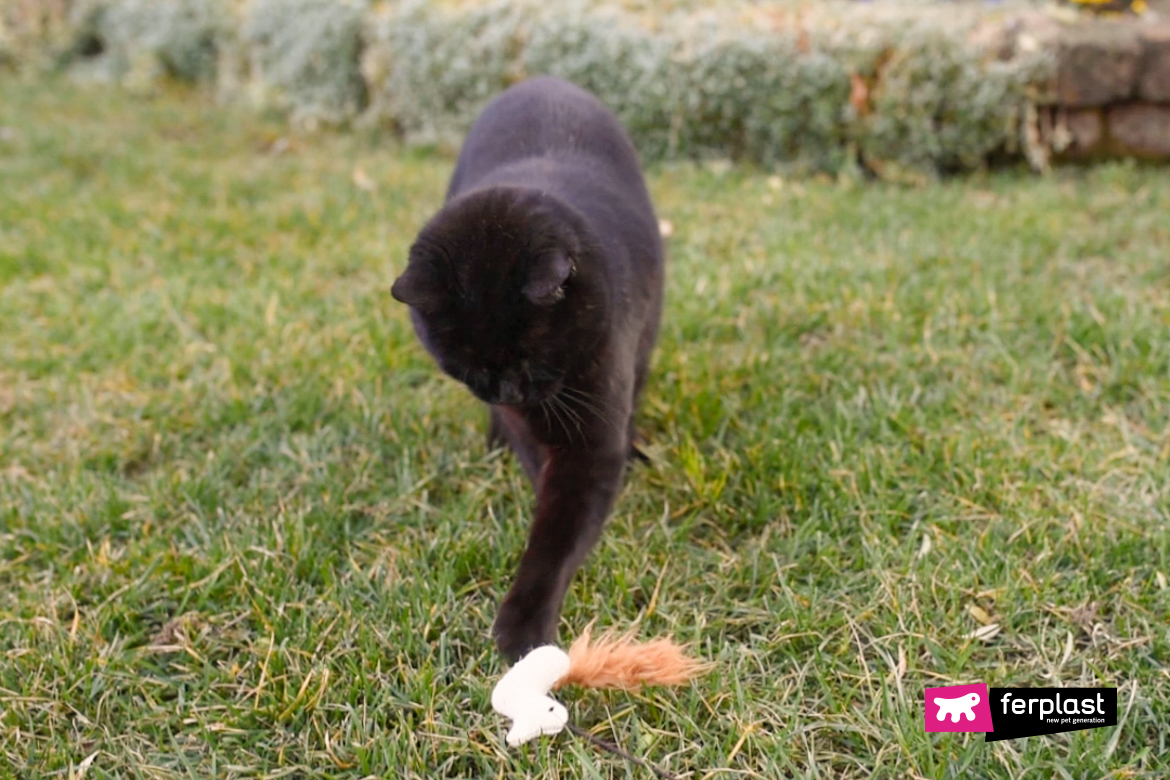 Another way to make your feline friend happy is with interactive games. These games can be useful for kittens, because they are preparatory for growth, but they are especially ideal for adult cats and also for more mature cats that have become lazy and have lost their desire to play.

Some, like Ferplast’s Trea e Discover, have hiding places for dry food and thus keep your pet’s mind active, by stimulating the ingenuity required to capture the desired reward. It is a good idea to be present, but to try to let your pet resolve the puzzle alone! 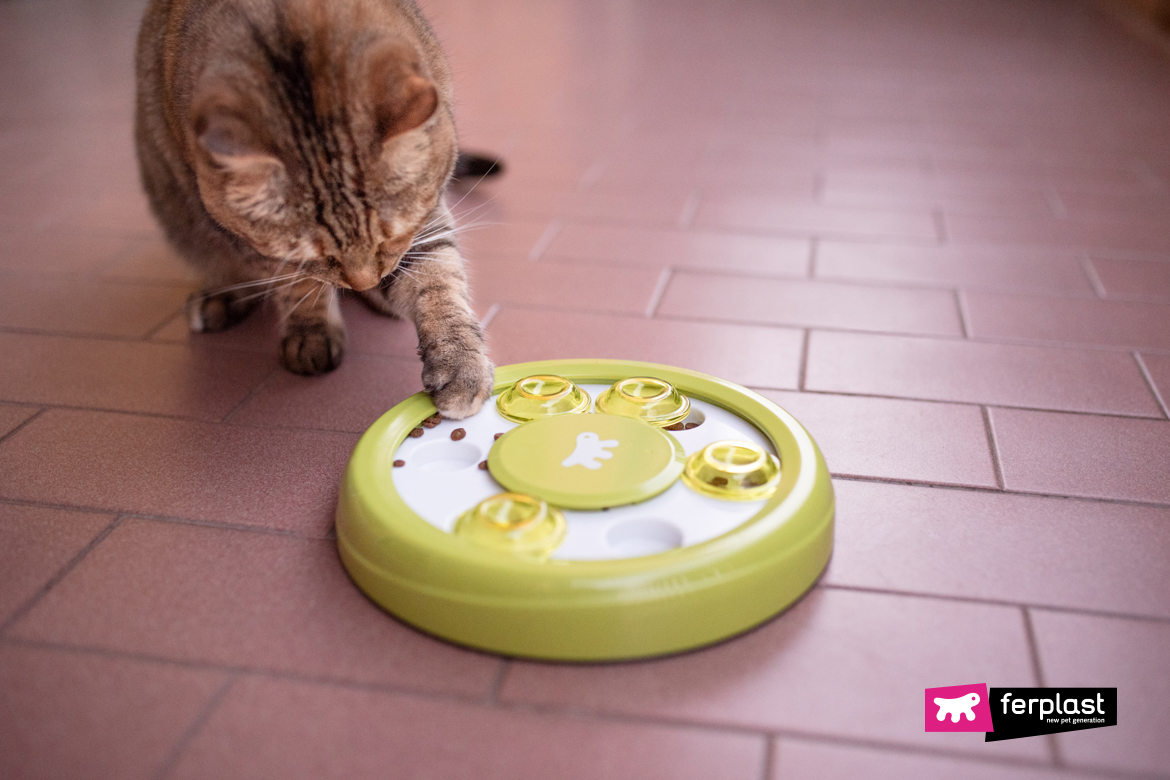 There are other really nice games like Tornado, excellent for seeing our domestic predators venting their energy and trying to grab the pom-poms and balls, or Labyrinth, a circuit with balls. 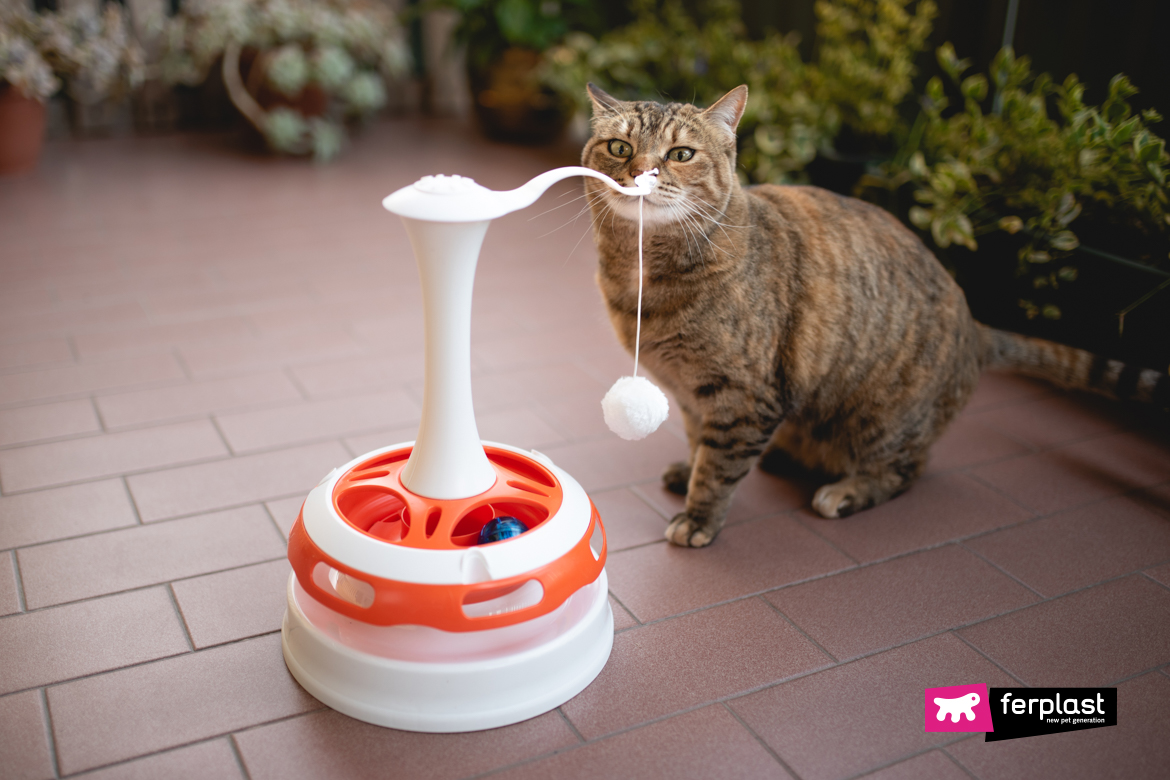 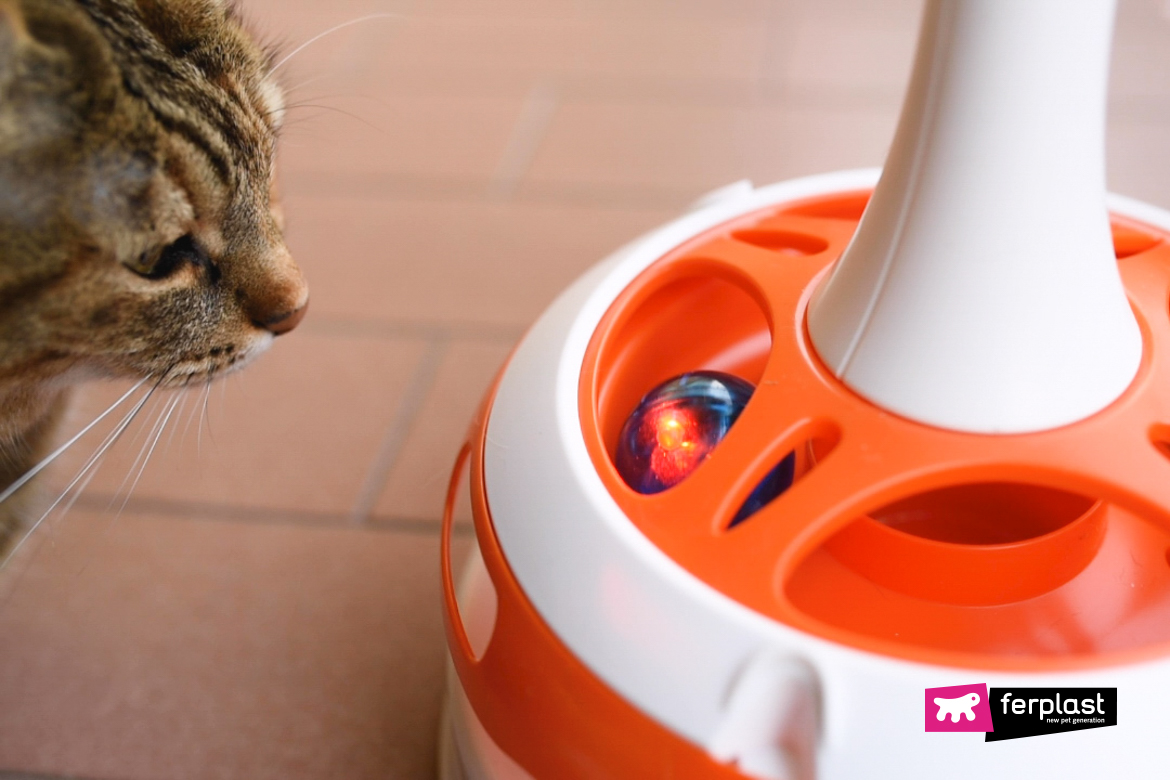 Cats play for a few minutes at a time, but several times a day. If you want to ensure that your pet’s interest is always active, try to alternate the games and avoid them all being available at the same time.