MANEKI NEKO, THE ORIGIN OF THE GREETING CAT-SHAPED LUCKY CHARM

The cat of fortune that moves its paw up and down is one of the cult objects of Japanese and Chinese tradition. Its name is Maneki Neko and it has become so popular as we often see it near checkouts of oriental shops and restaurants. But what is its origin and why is it considered a good luck charm?

Literally the word “Maneki Neko” is translated as: maneki – invitation, nod and neko – cat, therefore, “cat who makes a nod or an invitation”. It is also known as the “welcoming cat”, “fortune cat” or “money cat”. It is a sculpture often made of porcelain or ceramic, which is believed to bring good luck to the owner. The cat breed represented by the figurine is generally a Japanese bobtail.

The origin of the lucky cat is the most controversial point of this small object, since both Chinese and Japanese cultures claim the paternity.

The most popular legend is about a wealthy man who was caught in a storm and found shelter under a tree near a temple. Here he saw a cat that invited him to enter with its paw. He entered the temple, and, as soon as he got in, a thunder tore the tree in half. So, the cat saved the rich man’s life. From that moment he became a donor of the temple and helped to give it great prestige. When the cat died, the man built a statue in his honor that, over the years, took the name of Maneki Neko. 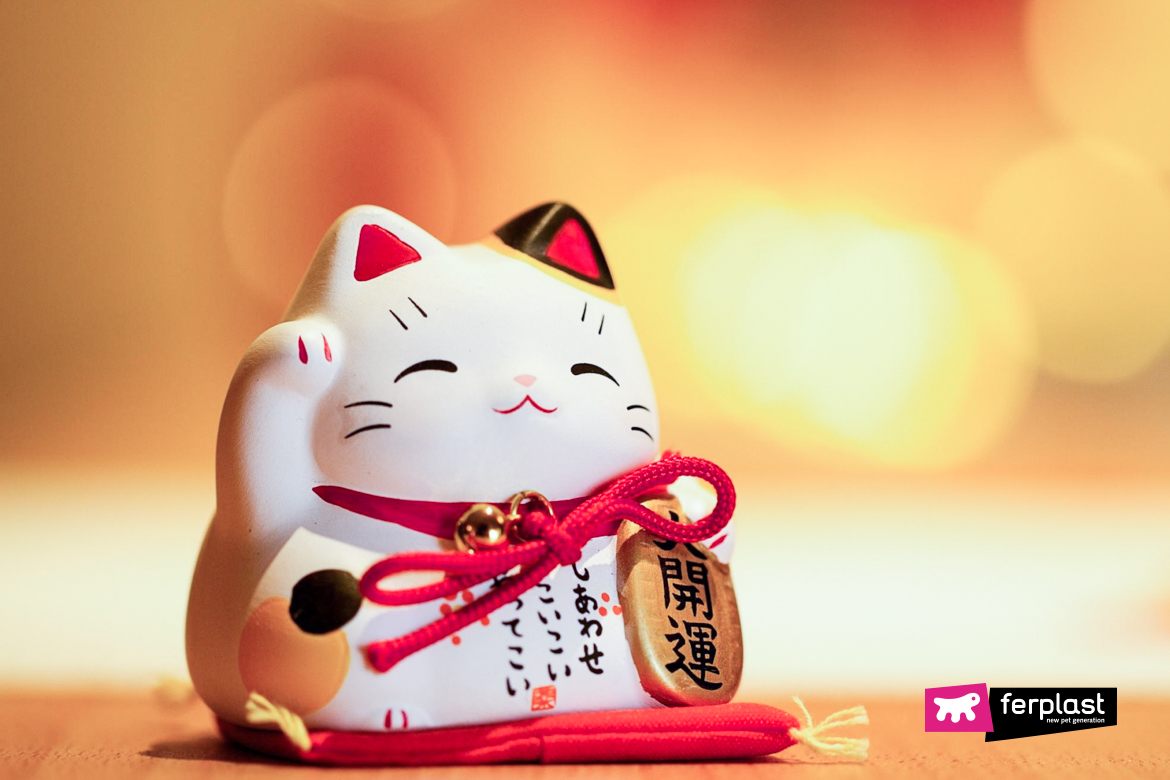 Symbology and meaning of the Maneki Neko

The Maneki Neko figurine is common in both East and West to attract good luck. There are different types, each with a different meaning, based on the color and the different paw raised.

The cat with the right paw raised brings prosperity and good fortune to health and to the family. It also attracts guests or welcome visitors.

The cat with the left paw raised attracts money and luck, so it should propitiate business and attract customers.

The higher the paw goes, the more luck it brings. 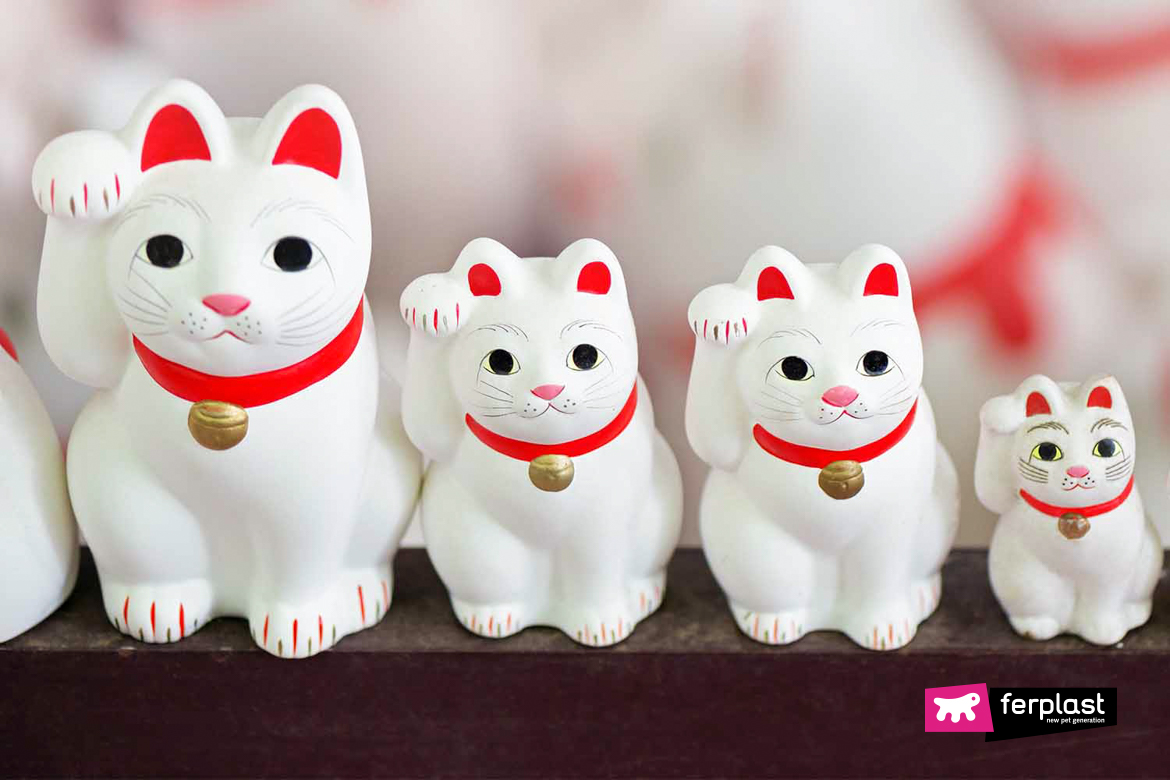 WHITE with orange and black details: it is the most common and brings luck to those who own it.

GOLDEN: it’s associated with wealth and economic well-being. It is especially used in commercial establishments.

BLACK: used to keep evil spirits away, to purify the environment from all negative things and as personal protection.

RED: it has mainly a healing and protective meaning, rather than a lucky one. It is used as a wish for a quick recovery.

PINK: recently added as a good omen for those looking for a partner.

GREEN: good wish in the achievement of important goals, especially regarding school career.

PURPLE: is a good omen for the realization of one’s dreams.

BLUE: propitious and helps in inner growth and personal safety. 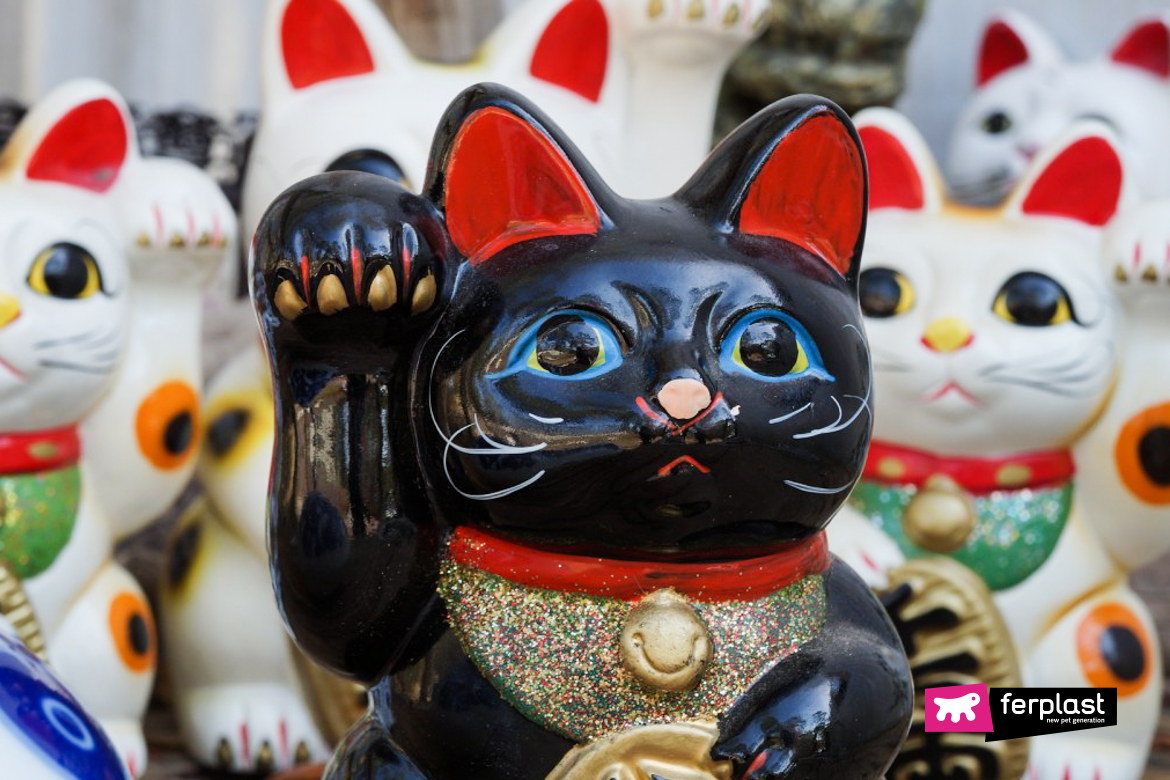 Maneki Neko usually have some accessories around their neck, a collar, a bell and a decorative bib or coin on their paw. The more accessories they have, the greater the effect of the lucky charm.

Do you own one too? What color?