HOW TO RAISE NEON TETRA FISH

Neon tetras, whose scientific name is Paracheirodon innesi, is a freshwater fish easy to recognize for its small size and for the red stripe on its side. It’s surely one of the species most easily found in domestic fish tanks, but do you know what you need to do to raise this species properly?

Neon tetra fish have slim bodies and never grow longer than one and a half centimetres but being petite doesn’t mean they can’t boast their typical bright colours. Their bellies are silver and they’re blue from the tip of their “nose” to the adipose fin, a neon blue that makes them visible even in dark waters; red is their colour from the belly to the tail. When neon tetras are sick or at rest, these bright colours fade.

Neon tetras get along with pretty much everyone, but of course it’s a good idea to avoid raising them in the same tank with large, territorial or predator fish: they’re so tiny they’d be the first to be gobbled up, no chance to escape.

Among the many species of fish that live in a fish tank, this is the one in which genders are most difficult to identify. Females usually have a plumper belly, but this is not enough to allow us to define whether a fish is male or female at a glimpse. 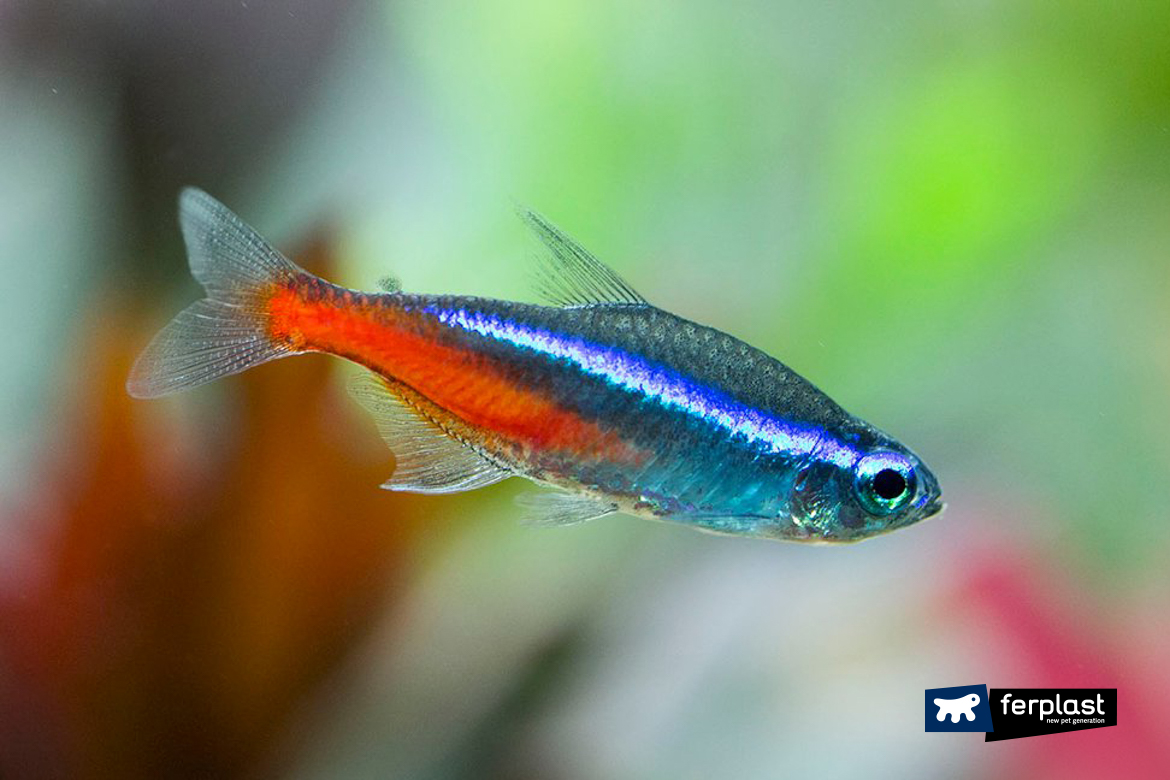 Neon tetras are originally from South America; in particular, their natural habitat is the Amazon river. There they swim in dark water areas with dense vegetation and roots, which means their well-being in your home requires a tank at least one metre long and with plenty of hiding places (plants, rocks) in low light. Their preferred temperatures range from 20 to 26° C, with pH between 6 and 7. You should also avoid putting neon tetras in a recently installed tank, as they don’t tolerate the changes that take place when a tank is first assembled. One of the main causes of incurable diseases among neon tetras, in fact, is sharp temperature changes.

Neon tetras are peaceful fish that love swimming in schools; they need to be in groups of at least 6 fish, otherwise they might suffer from stress and fall ill. 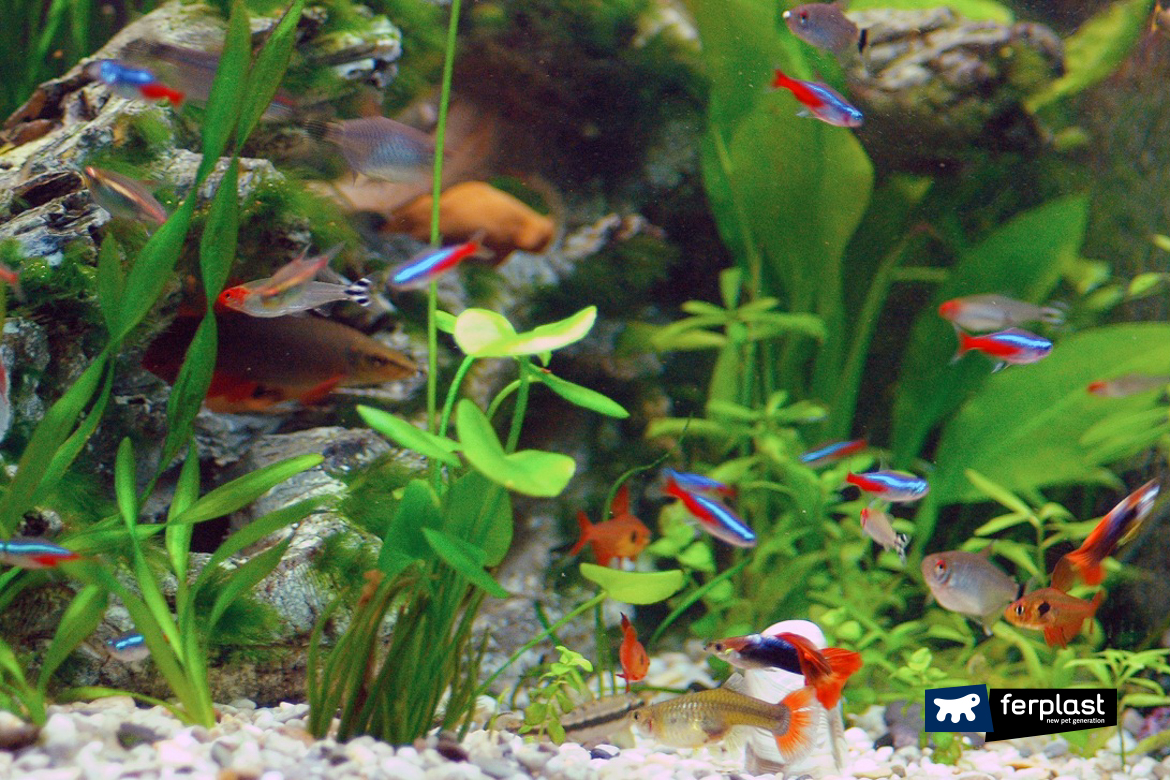 Neon tetras are carnivores, but in a tank, they adapt to all kinds of food, which is why we’d rather define them omnivores. Their diet is easy to manage: give them insects, such as gnats, or live or free-dried bloodworms 2 to 3 times a day, or fresh or dried algae, living or freeze-dried brine shrimp, or fish food pellets.

Abnormal behaviour or strange spots on their bodies may mean they’re ill. If you notice something like this, immediately place the suspicious subjects in a quarantine tank, to keep them from infecting all the other inhabitants. 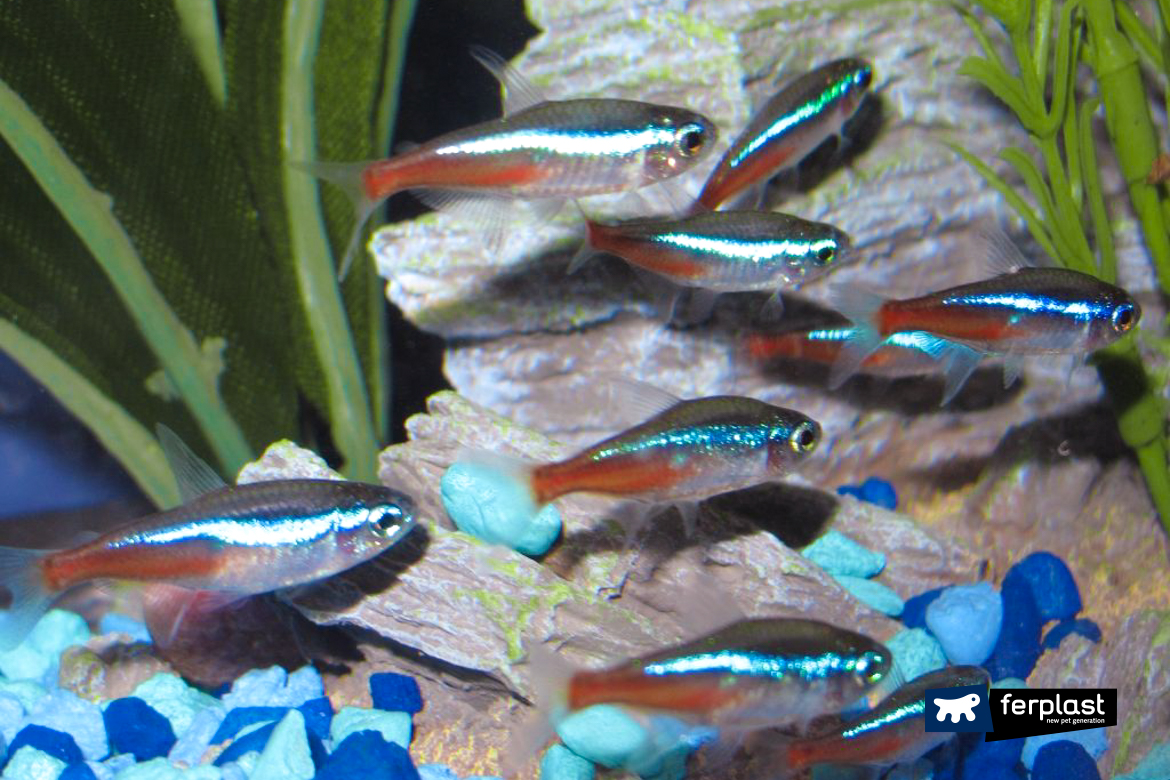 Getting to know the fish in your tank is very important to make sure they’ll live serene, healthy lives!