HOW TO MAKE A CAT SLEEP AT NIGHT

If there’s one thing that almost all cats have in common – their habit of meowing and getting up to all sorts of things in the middle of the night, thus waking up their unfortunate human friend. Here are some useful tips to make a hyperactive cat sleep at night, so that you can finally have long, peaceful sleeps yourself!

It’s the same old story every night: kitty jumps on the bed, gives you a lick on the nose, one too many “meows” and you can say goodbye to your much-desired sleep. For those who live with a cat, this is the pattern that repeats itself every night, but do you know why?

Why don’t cats sleep at night?

Cats are particularly active and lively at night; they often spend their days sleeping and as soon as the sun sets, they come to life, looking almost possessed to us! The explanation can be found in their origins: for the wild ancestors of the cat, the most favourable time for hunting was in fact at night, when the prey came out of their burrows. Furthermore, as felines have highly developed sight, even in the absence of light (very different from their prey), and hunting was much simpler and more satisfactory for them if they did it in the hours of darkness.

What to do if your cat is wide awake at night

Until they are seven months old, cats are still kittens and they easily adjust to the rhythms that their master imposes on them, but after the eighth month their true nature, that of nocturnal predators, slowly emerges.

On average, an adult cat wakes up twice during the night and does so with the intent to play, eat or even just because he wants some company. What remedies can be adopted to prevent your furry friend from ruining your sleep? 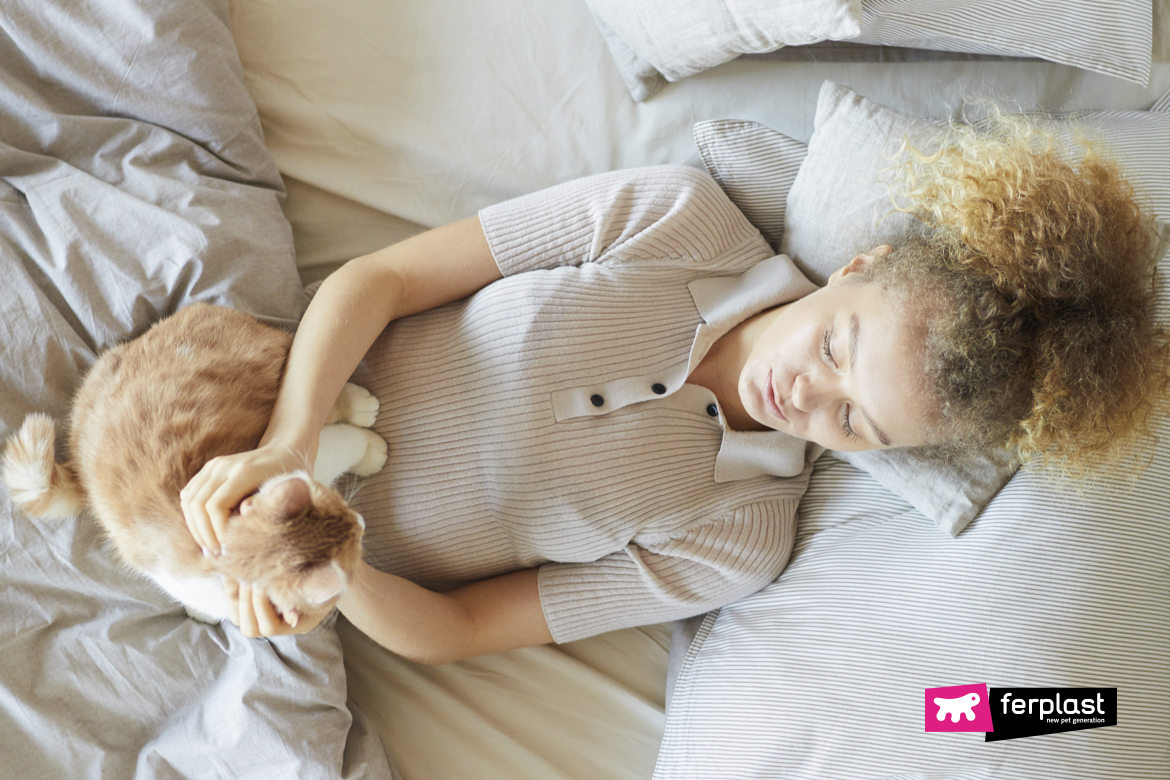 The first step towards being able to sleep for 8 straight hours is to close your bedroom door, a trivial but very effective solution if you don’t want to be disturbed. Initially, you cat might scratch on the door, trying to open it, but when he not generates no reaction, he will soon stop. 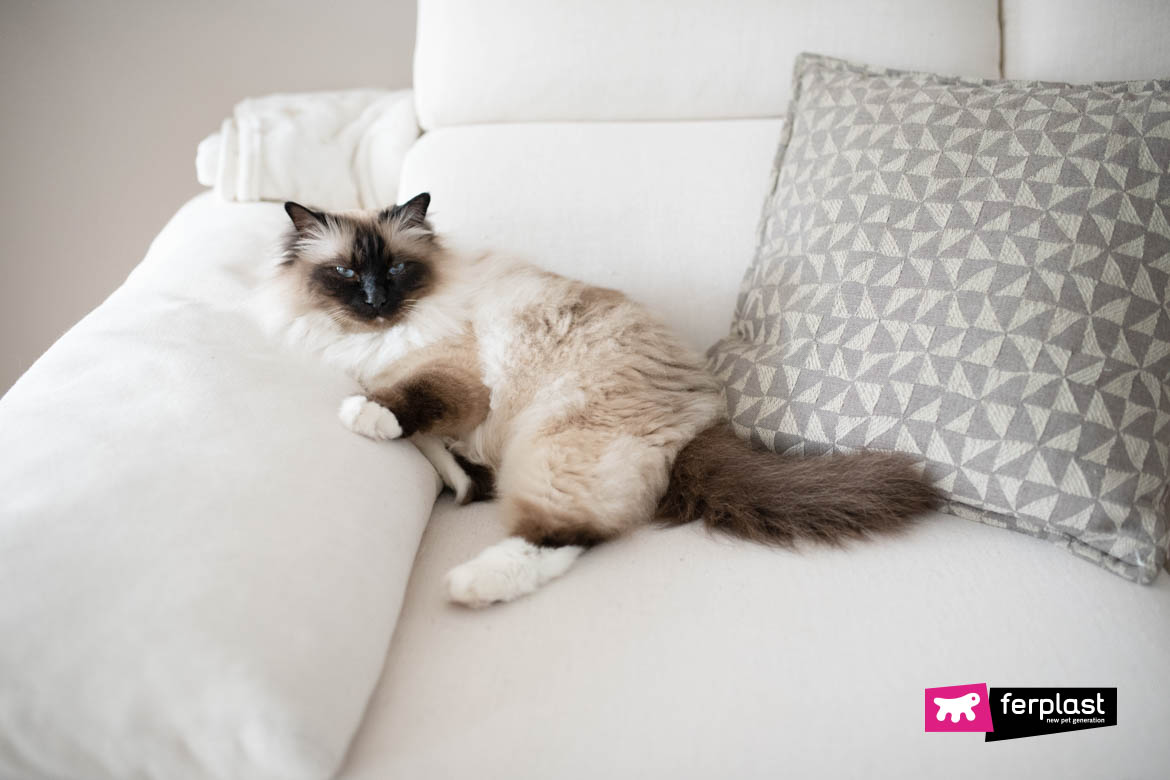 The best advice on how to calm your cat at night is to increase his daytime activity, organizing the environment so that it stimulates and keeps your cat active during the day. Provide your cat with toys, such as little balls, scratching posts with moving toys, boxes with holes in them, where cats can enter, exit, hide, etc. Also, interactive games such as those in Ferplast’s Clever&Happy range, are very useful for keeping your cat busy. In fact, without sufficient stimuli, he will tend to develop stress disorders that make him more hyperactive. Play with him or at least devote some attention to him in the evening, in order to tire him out, so that he will prefer to sleep at night, rather than coming to lick your face. Another trick is to adopt a playmate for your kitty, as they will keep each other company! 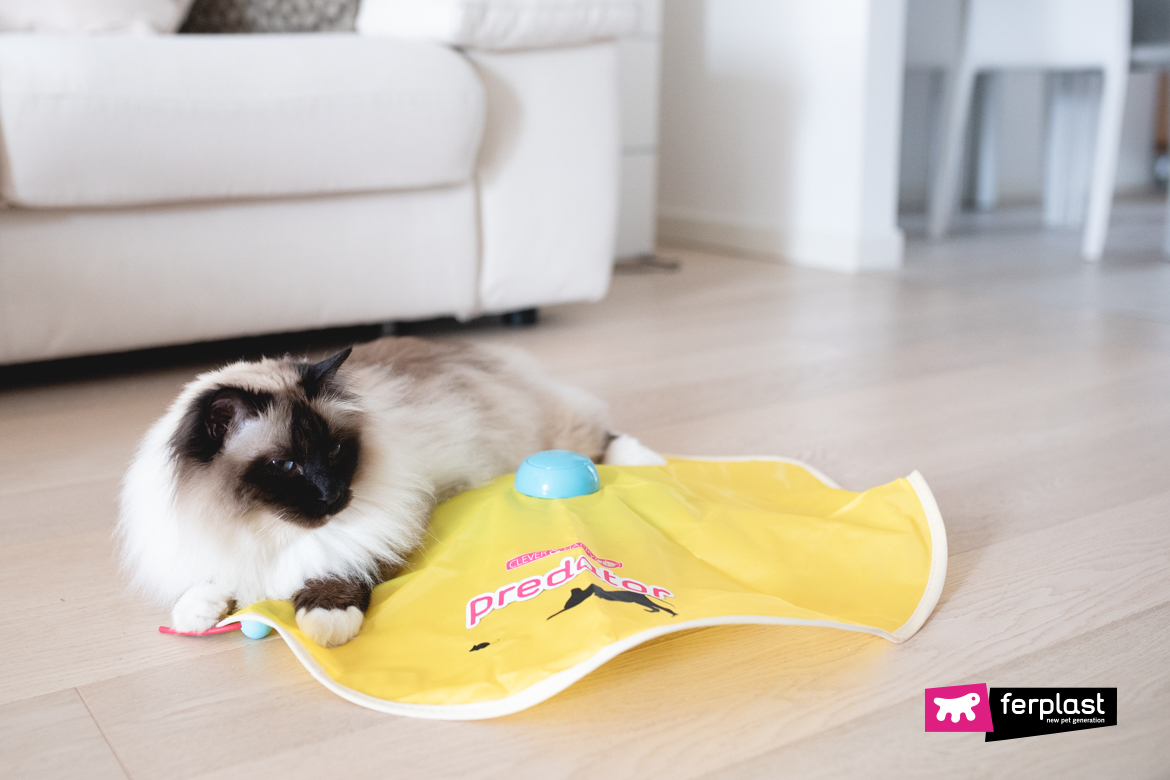 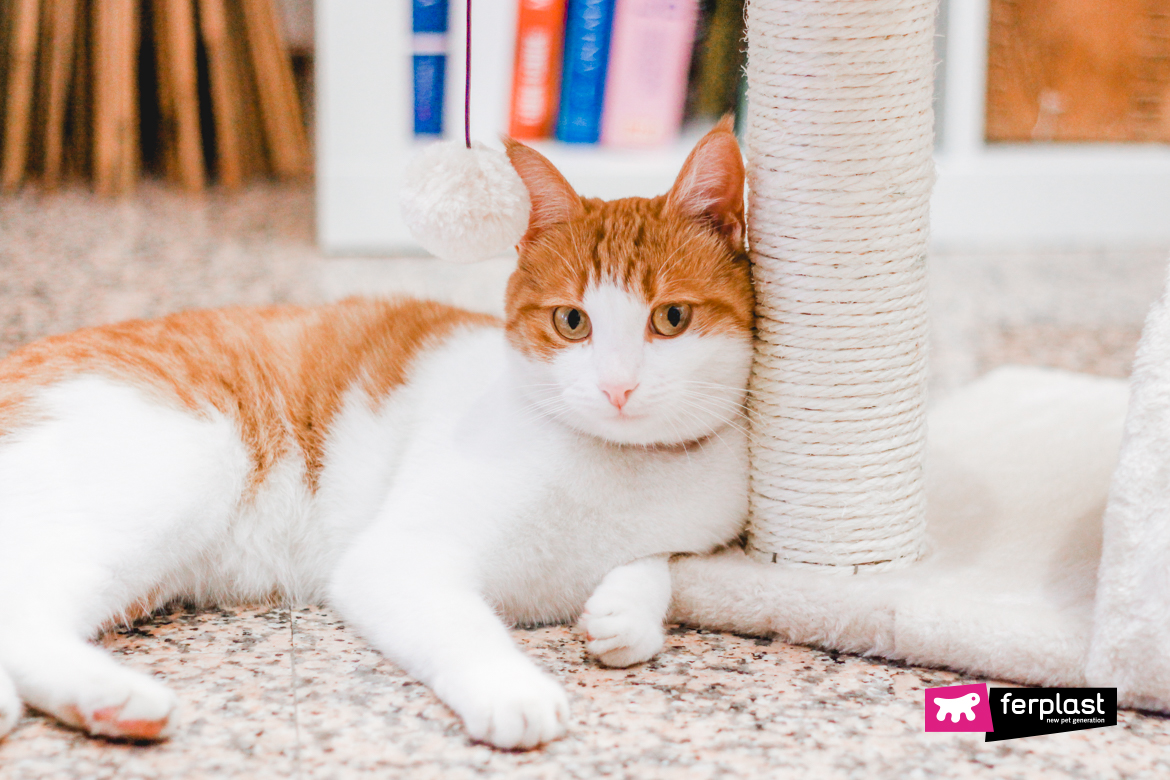 If kitty come into your room to see you, don’t make the mistake of getting up and filling his bowl, otherwise he will get used to eating in the middle of the night. Instead, give him some dry food just before going to bed. That way, he will go to bed with a full stomach and this will increase the feeling of lethargy. Basically, try not to indulge your cat, giving in to his night-time requests, creating a situation in which your cat will up at night on purpose, to eat or play. 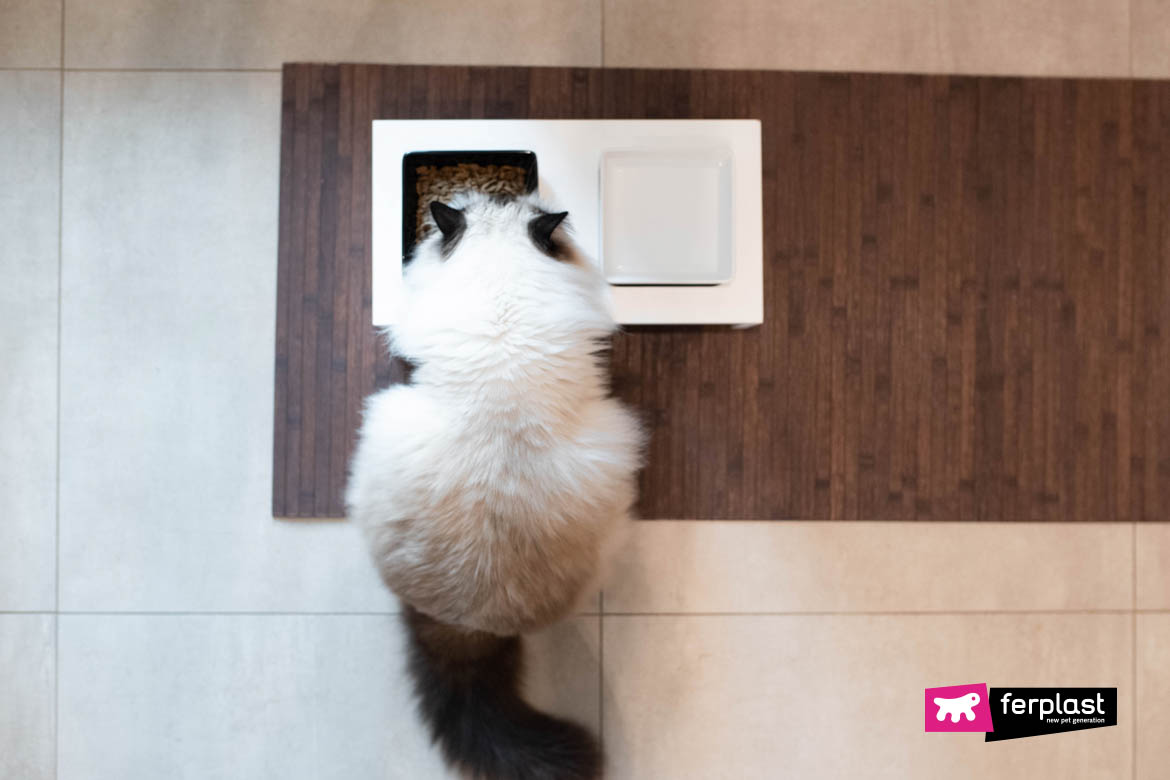 Cats always tend to sleep in the same place: whether it’s a pillow or a bed, the important thing is that they are always clean and placed in a quiet, sheltered, safe place. If you have other cats, make sure that each of them sleeps on their own cushion, as foreign smells annoy cats a lot and may even lead them to refusing to sleep. 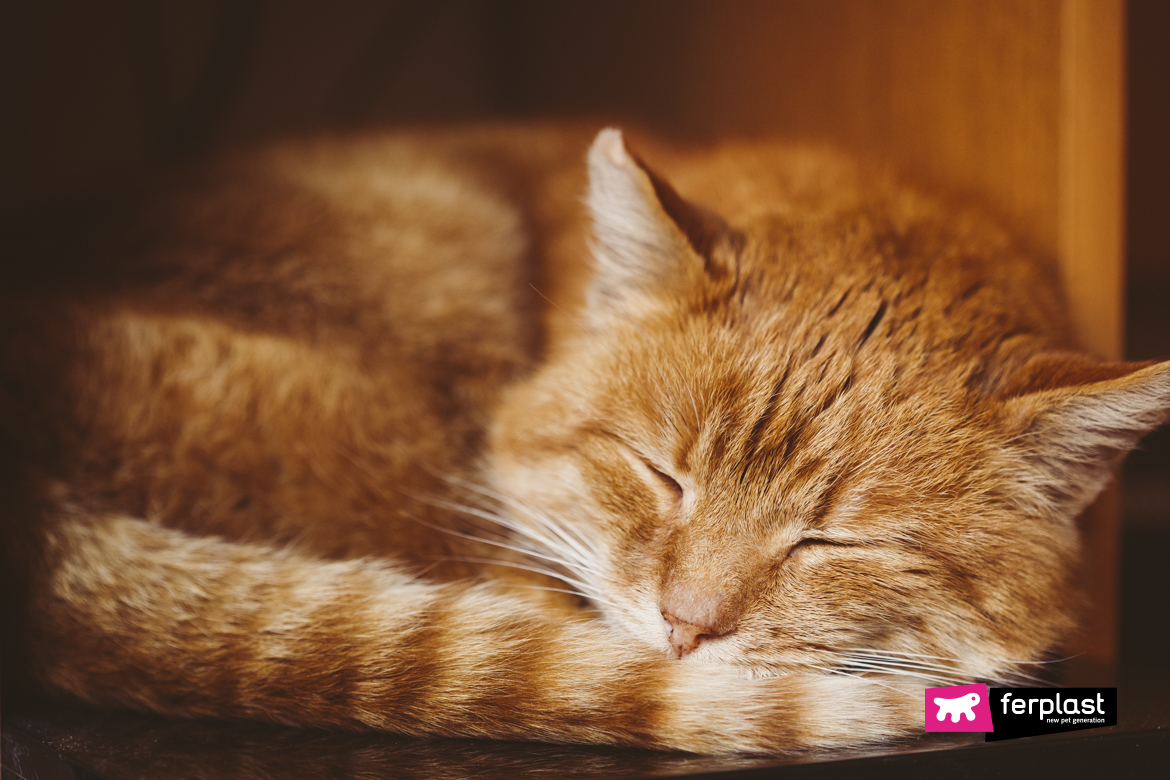 With this advice, you will soon succeed in sleeping at night again and cohabiting with your cat without traumas!