An irresistibly cute little nose, soft fur and a serene temperament, guinea pigs are among the most popular and beloved rodents. Let’s learn more about them and what their needs are.

ALLOW ME TO INTRODUCE… THE GUINUEA PIG!

Guinea pigs are South American rodents, with the exception of the Cavia Porcellus or domesticated guinea pig species, the quiet and timid little pet that lives in homes all over the world. As there is no evidence that this pet ever lived in the wild, they have been in homes for several thousand years now. One of the many things you have to consider when thinking about adopting one is that they can live for 6 years and so they’ll be with you quite a long time.

Like we said, the guinea pig is a shy and mild-tempered little guy and it might take him a while to come out of his proverbial shell, to leave his natural mistrust behind. On the other hand, not having any sort of powerful self-defence mechanisms, the running and hiding instinct is what protects him from danger. But every guinea pig has its own character, so one can be more outgoing, while the other a bit more timid. But once they’re accustomed to you and your presence, you’ll see just what sweet and friendly little pets they are. 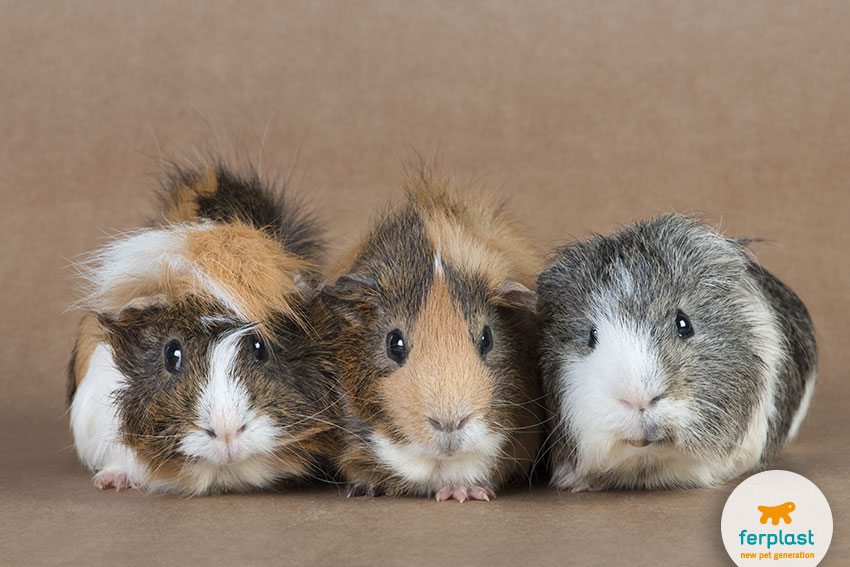 Guinea pigs are social creatures and so it’s not a good idea to leave them alone for long periods of time. They actually need the company of other guinea pigs and are happiest when they live in small groups or even as a couple. Putting two males together in a cage is not the greatest of ideas, it’s best to have a male with one or more females so that they are not aggressive among one another. If you want to prevent baby guinea pigs from being born, then it’s best to sterilize the male – the operation is simpler and far less invasive.

One of the interesting things about guinea pigs is that they are very communicative creatures. They talk among themselves with a lively series of noises and may even surprise you with their unusual ‘vocabulary’, they sometimes even sound like they’re singing! Guinea pigs don’t just chat amongst themselves, some of their noises – which sound different – are designed to communicate with you. Over time, you’ll learn to distinguish the sounds he makes and maybe even figure out what he’s trying to tell you.

CARING FOR A GUINEA PIG

So, are you ready to adopt a guinea pig? Good! First of all, you’ll need a cage. This is an important purchase because it will be your new friend’s home, and he needs to feel safe and protected once in there. He needs to move around, so it needs to be a spacious cage, one that can accommodate all the guinea pigs you want to bring home with you. The bars need to resist chewing and be free from protrusions that might harm him. It needs to be easy to take apart and clean. And seeing as they are timid and easily frightened creatures, it needs to be put in a nice and quiet corner of the house.

Inside the cage, your new guinea pig will also need a little house in which he can hide when he’s been scared or needs some alone time. Make sure the wood of the house has not been treated with hazardous substances because your guinea pig, being a good little rodent, will probably gnaw that it. The houses Ferplast makes are constructed with non-toxic material and, to make them easier to clean, have no floor – so that it doesn’t absorb waste products. And speaking of being easily scared – did you know guinea pigs sleep with their eyes open!?

Getting back to furnishing the cage… other important accessories include a feeder and water spout. As long as guinea pigs are properly fed, they usually don’t have health issues. So his diet needs to be carefully controlled, rich in hay and vegetables, but also in Vitamin C, which he can’t manufacture himself.

And then last but certainly not least, you need to provide him with toys that dispense food or things he can gnaw on, anything that will help trim his constantly growing teeth, which, if left un-trimmed, could cause health problems.

OK, once you’ve gotten it all, you’re ready to bring your new friend home with you!