With all its colourful inhabitants, plants, rocks and decorations, admiring an aquarium can keep us truly captivated. And, like any spectacle worthy of respect, it also needs to be well lit to accent the actors in the scene. So, which option is best, LED or fluorescent (neon)?

For those who own a reef aquarium, the aquarium lighting does not only serve an aesthetic function but is also fundamental for the proper growth of plants, invertebrates and corals. As such, it is truly important that the aquarist is aware of the importance of proper lighting in the aquarium, where everything is a matter of equilibrium. Fundamental to this purpose are both the intensity of the light and the lighting spectrum. 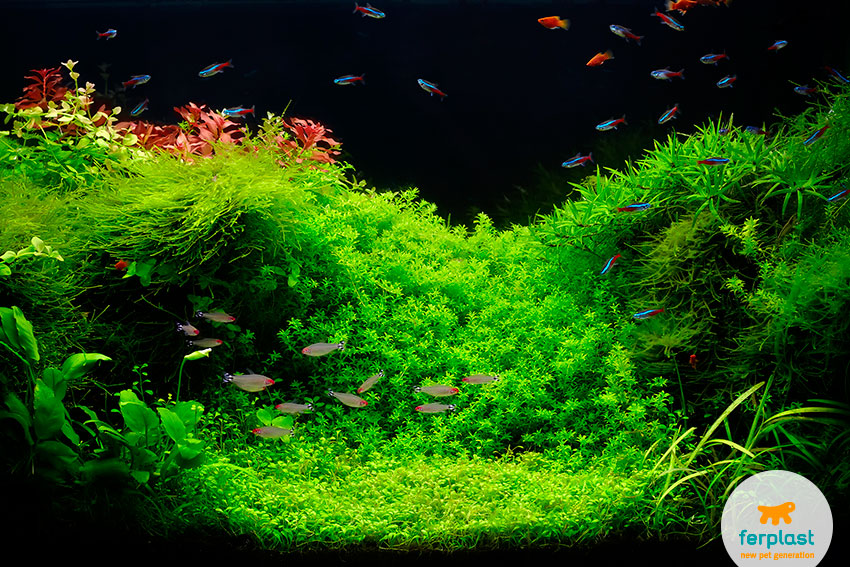 LED (Light-emitting Diode) has become a well-known technology thanks to its daily applications. Its operation is specifically based on light-emitting diodes that are able to produce light when crossed by an electric current. The advantages of this technology compared to traditional fluorescent tubes (neon) are manifold:

It must be said, however, that the classic neon lights with T5 or T8 fluorescent tubes continue to be widely utilised because they are cheap and are still sufficiently good at their job (especially if replaced annually, as recommended). Far from being obsolete, neon lighting (especially T5) can guarantee excellent performance, being satisfactory in freshwater aquariums, which are generally considered to be less demanding than marine versions.

In any case, especially when dealing with large aquariums, LED lamps are recommended. The purchase cost is, in fact, amortised over time thanks to their lower consumption and longer duration compared with neon. On average, LEDs last for a minimum of 20,000 hours (LED Bar by Ferplast even reaches as far as 50,000), versus 5,000-6,000 hours for neon (of which only 2,000-3,000 are effectively exploited whereby they are replaced annually), while we have calculated that the LED Bar consumes up to 50% less than a traditional fluorescent bulb.

As said, is not just a matter of aesthetics, but especially about the needs of the aquarium inhabitants. Certain plants require half-light, others a lot of light; some fish live hidden and excessive brightness may cause them stress. In addition, incorrect lighting may foster the growth of algae. For these reasons, it is necessary to be well-informed on the requirements of our guests in terms of light and to choose the technology able to best meet their needs.