AN ARABIAN NIGHTS PARTY FOR A 50TH BIRTHDAY!

Not long ago on this blog we shared some details on what was planned, but no one could have imagined just how grandiose Ferplast’s 50th birthday party really would be! Elegant, classy and romantic, it was a night filled with surprises and emotions. Let’s take a closer look…

To give this party its due importance, the venue for the gala evening was the magnificent villa Piovene da Schio in Castelgomberto, very near to company headquarters. When 6:30 rolled around, the shuttle buses from the parking lot started to arrive laden with guests, all beautifully dressed in elegant evening wear. They were greeted by some very special hostesses… clad in utterly gaudy colours and with their faces painted like animals! 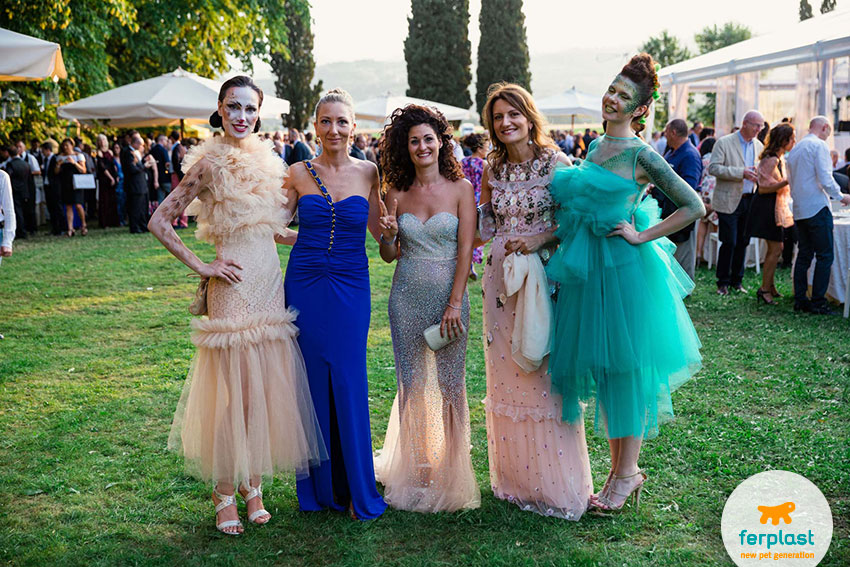 After reaching the other side of the Italianate garden there was a grand buffet set in the villa’s enormous garden laden with starters, in the shade of a row of trees decorated with bird cages covered in flowers and intertwined ivy. The atmosphere was made even more special with the background music provided by the deep and sultry voice of Stevie Biondi and his band. 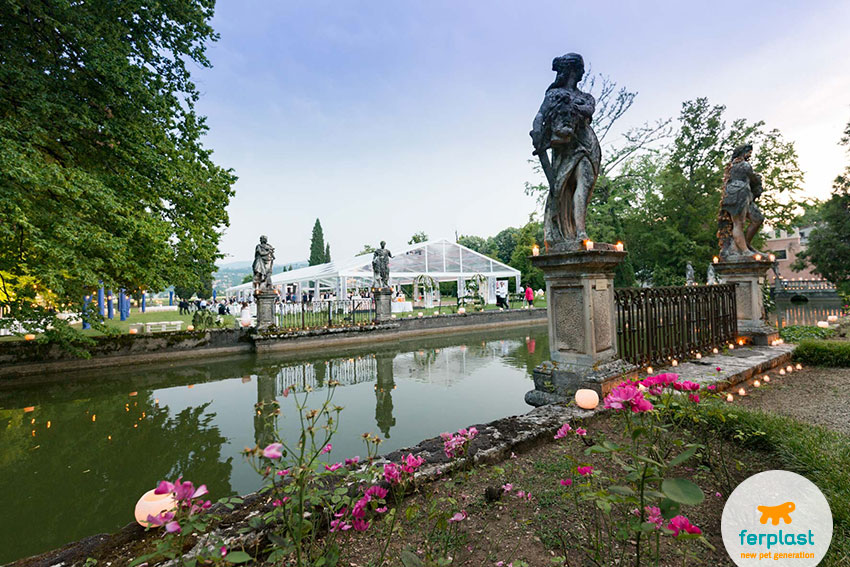 There was a huge tent in the garden as well, decorated with flowers and hanging cages, home to the stage. It was here that speeches were held by the founders of the company, Carlo and Caterina Vaccari (his sister), Carlo’s children Nicola and Francesca – the managing director and the head of the Zoodom stores, respectively – and by such personages as the mayor of Castelgomberto, the mayor of Nesvady and a deputy of the Ukrainian government, not to mention representatives of Ferplast employees and workers, who took this opportunity to warmly thank the Vaccari family and offer them a heartfelt gift. 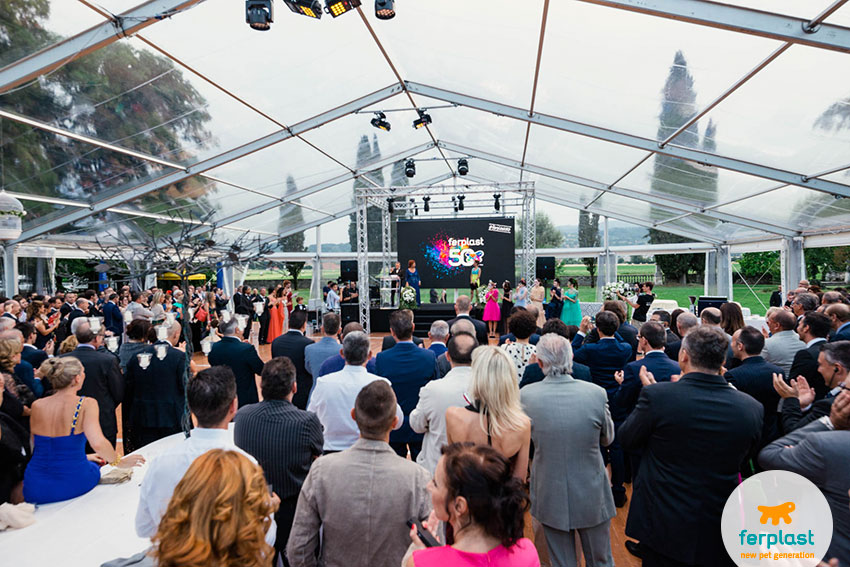 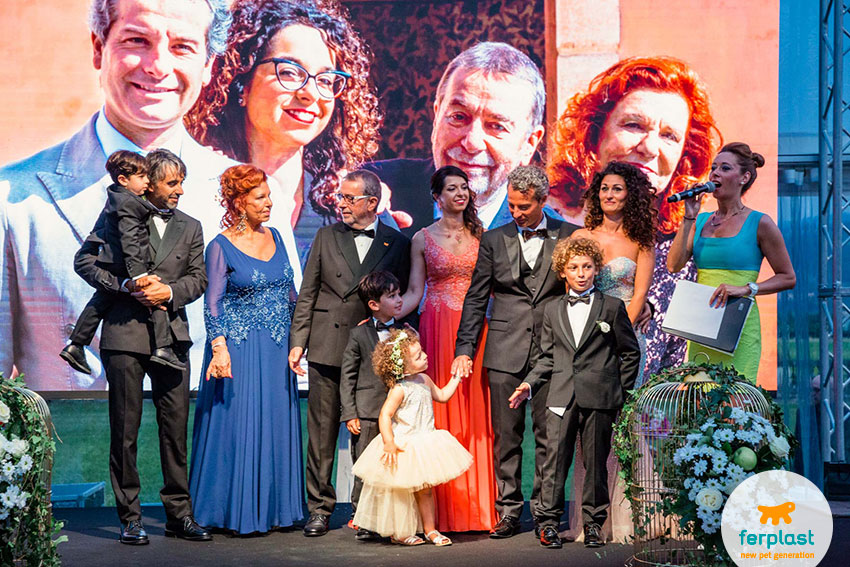 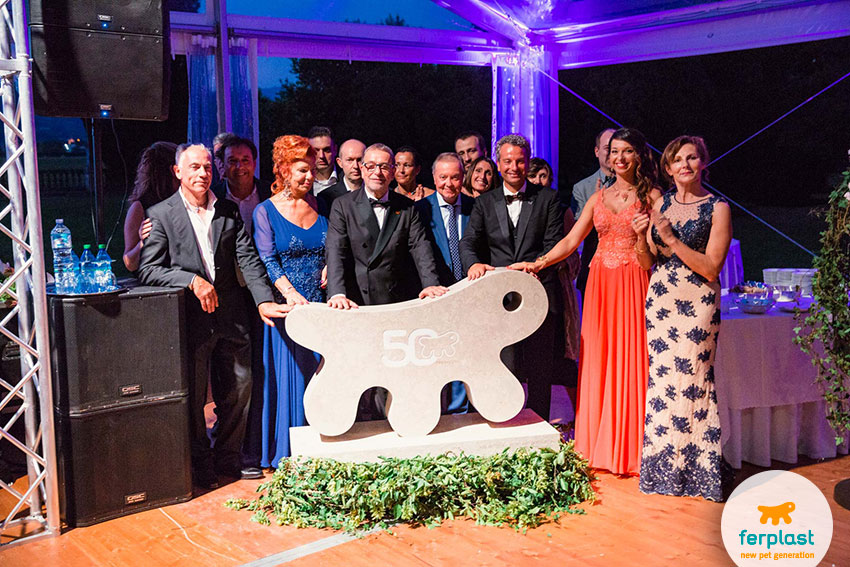 Dinner was served after the speeches. The tables had been set in the three porticos that line the courtyard of the villa, which itself offered up a real surprise. At the end of the first course, the façade of the villa lit up with a 3D video show that enchanted everyone present as, among other things, huge dogs, cats, fish, birds and rodents seemed to emerge from the walls and leap into the laps of the spectators. 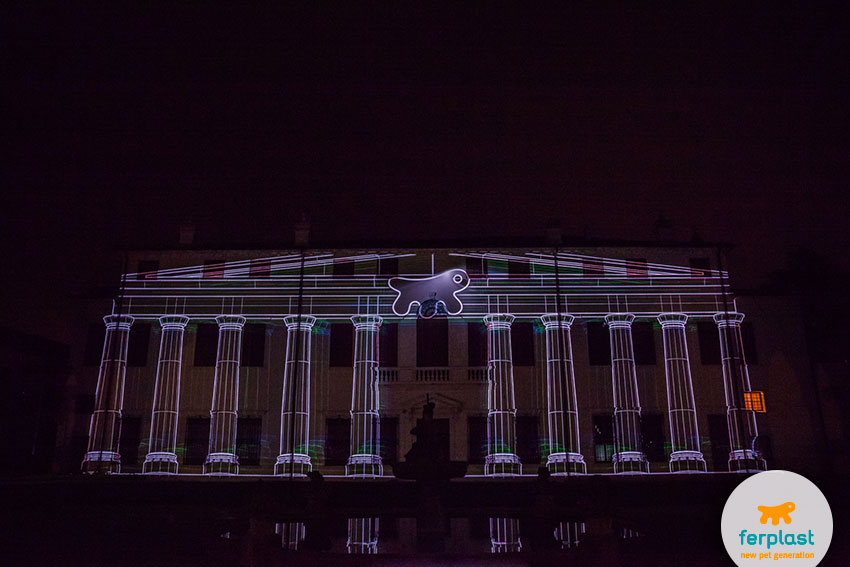 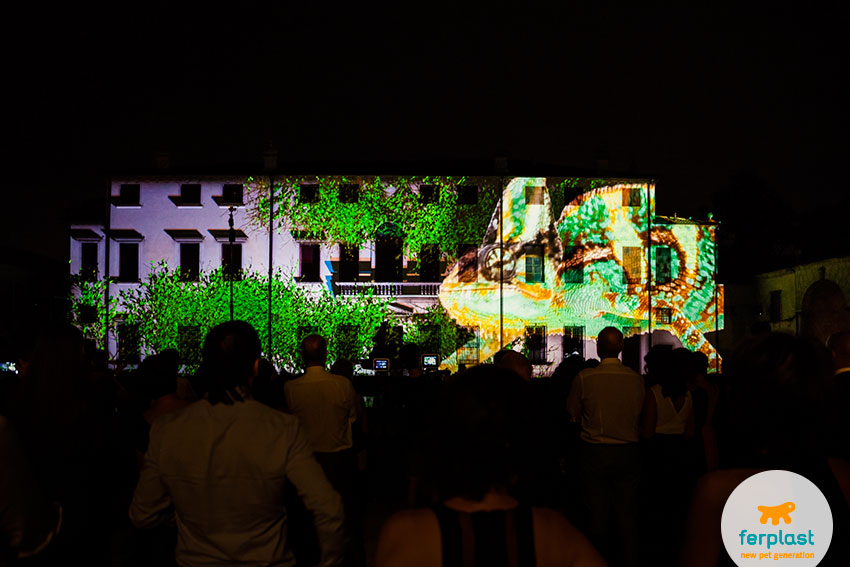 And it didn’t end there! After the second course the lights went out and artists on stilts dressed as butterflies with big glowing wings flitted between the tables and danced in the courtyard… 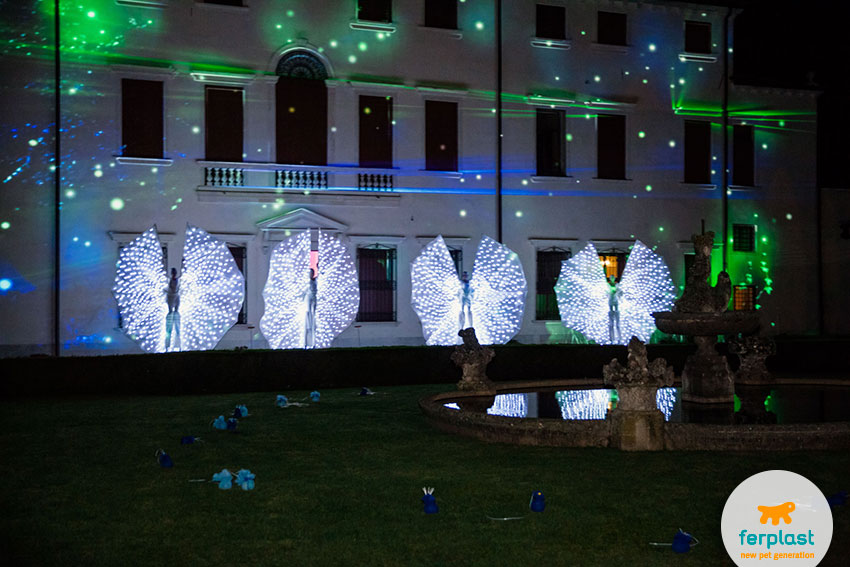 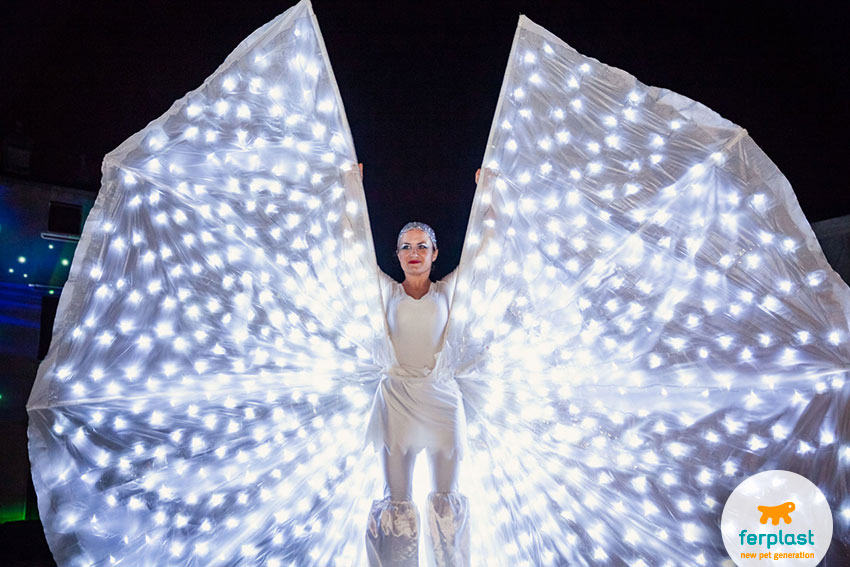 …to then lead the diners back into the garden, now entirely lit with countless candles! 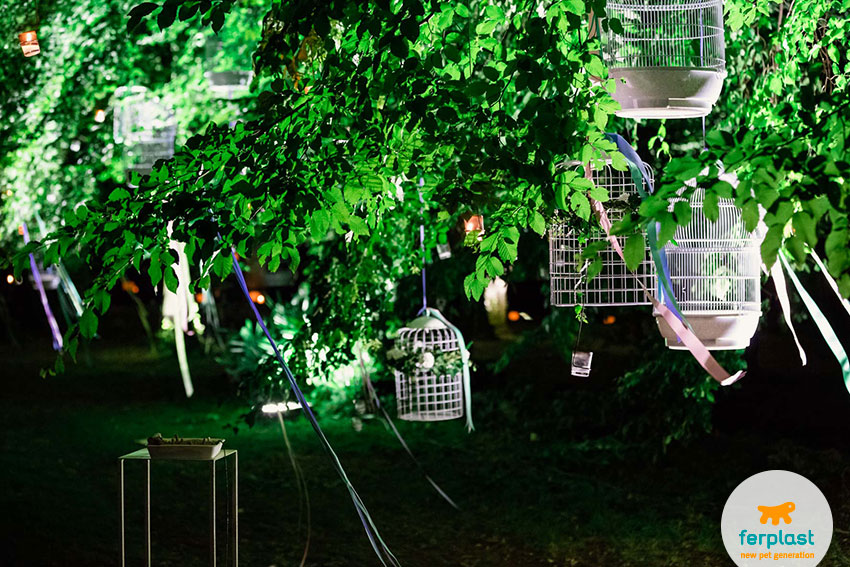 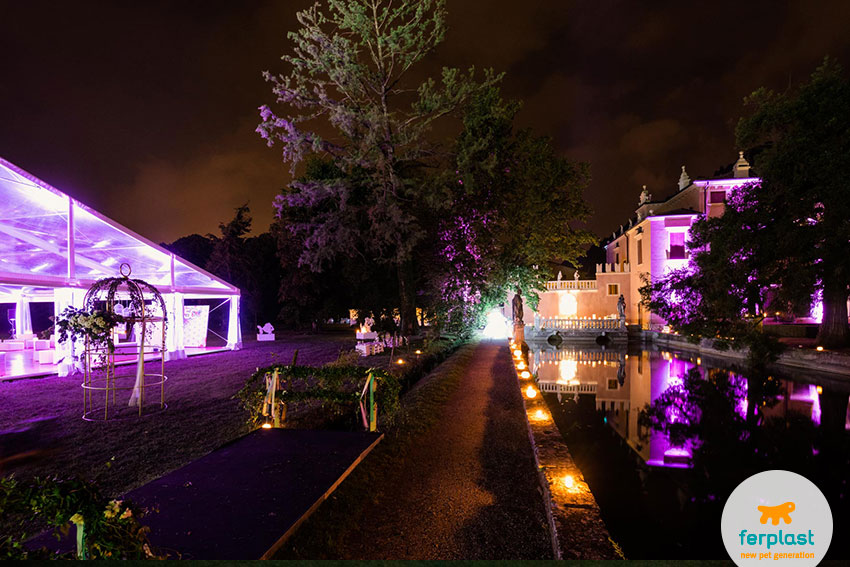 Back in the huge tent, the guests were presented with – what else – the fabulous 2 metre high birthday cake, a custom-made design masterpiece of breathtaking beauty that left everyone wide-eyed in awe. And just to add the proverbial cherry on the cake, the grand birthday cake was served along with a rich buffet of other sweets and plenty of fresh fruit, not to mention a wide array of gelato flavours. 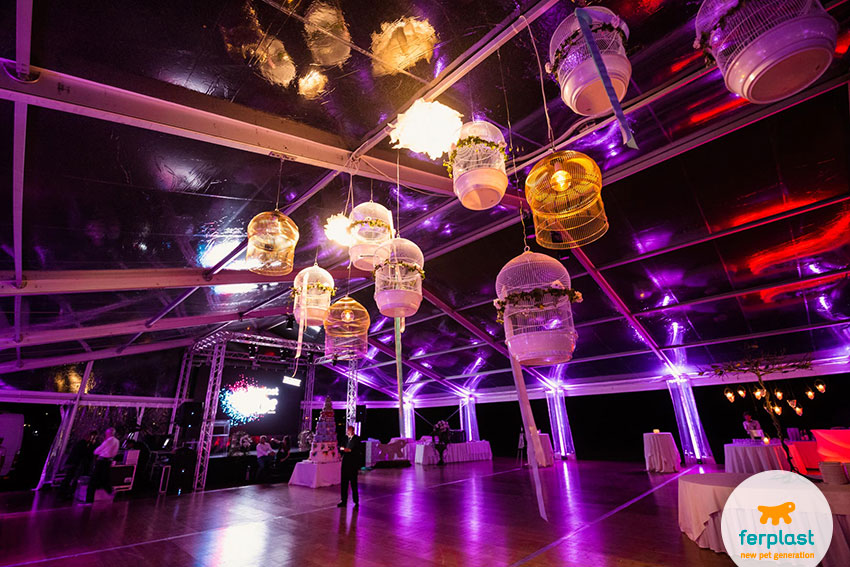 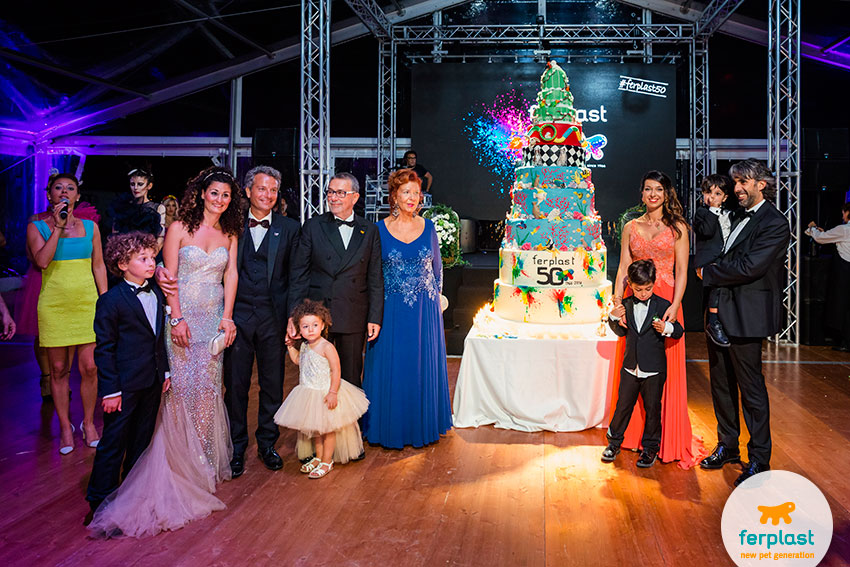 A 50th birthday calls for things to be done in grand style, don’t you think? A party like this would not be complete without a full display of fireworks! And so the night sky above Castelgomberto was illuminated with a pyrotechnic spectacle that marked the beginning of the dance. After an entire evening of elegant attire, the DJ’s music ensured that ties, jackets and high heeled shoes were soon eliminated and that the dance floor was hopping until the wee hours of the night. 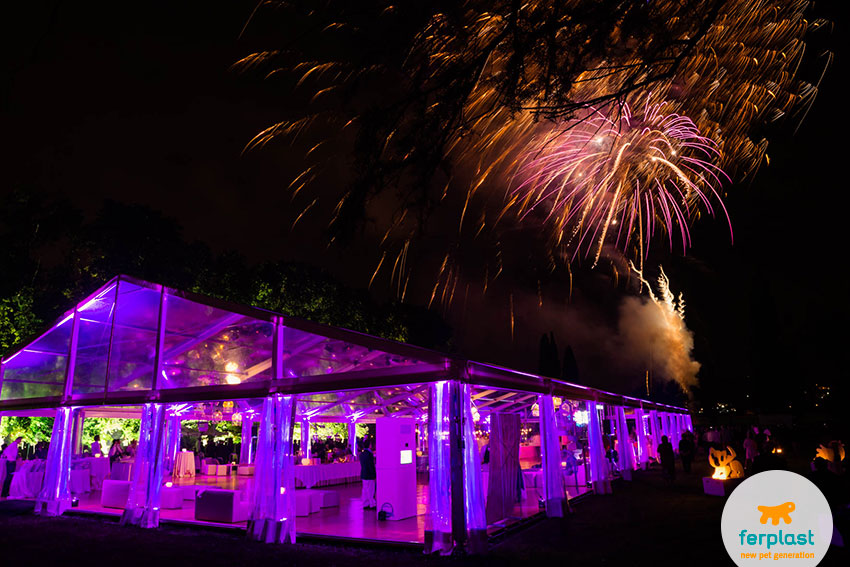 This 2nd July, 2016, was, to say the least, a memorable one for everyone. A party in grand style where everyone had a tremendous time but, above all, everyone felt they were part of a marvellous family made up not only of management and employees, but also of clients, suppliers and everyone else who came to celebrate this great event.

Thank you, Ferplast, from the bottom of our hearts!!!!