It is really awkward when a thunderstorm breaks out and our dog starts to panic. Dogs often perceive a storm before it arrives and that’s enough to make them hide, trembling, under the bed, barking madly, trying to escape or even peeing inside the house.

We have already spoken about a dog’s socialization phase: the more stimuli he learns to recognize during this phase of his life the better, because it will help him to be a more balanced adult and not to have fears and bad reactions. Nevertheless, it can happen that our furry friend, who was totally indifferent to thunder and lightning as a puppy, one day wakes up and is completely terrified by a storm. What we can do in such cases, is to help him face his fear, by being very patient.

Our goal will be to desensitize our dog to the thunderstorm, trying to replace his fear with some kind of stimulus that will shift his attention towards a positive emotion. For this purpose, we can play him thunderstorm recordings at increasing intensity (we don’t want to terrify him ourselves!), meanwhile inviting him to play or do some exercises with a nice reward of tasty treats at the end.

When there is a real thunderstorm, we will have to distract him from the warning signs that accompany its arrival. Therefore, to reduce his perception of lightning, wind and a dimming of the light, we will need to take further measures, such as:

If Fido is still too fearful to play when a thunderstorm arrives and he only wants to hide, we must not go to drive him out of his hiding place; to avoid feeding his anxiety, it is better to leave him free to use the kennel, cushion or pet-carrier that he is used to and in which he feels safe. So, in the same way in which we help him face his fear of fireworks, the important thing is not to give up… with perseverance, sooner or later we will have a result – it is all a question of habit! 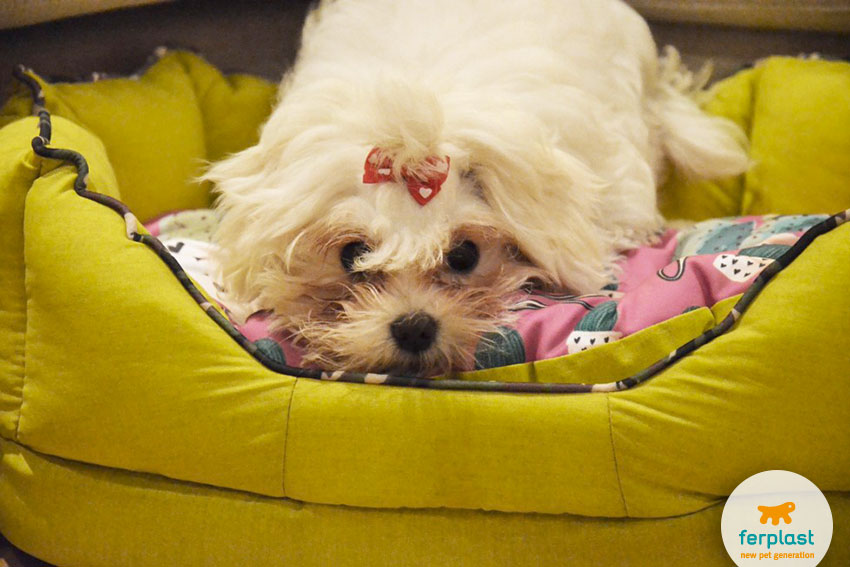 Many thanks to Trilly, who acted as a model on Ferplast’s Fiore Cactus bed!